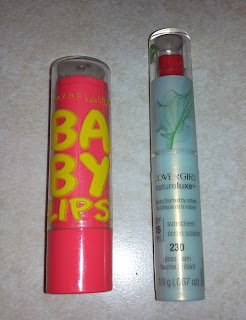 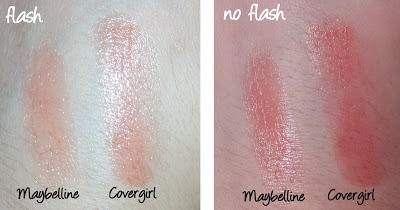 Here is a review/comparison of Maybelline Baby Lips in 70 Coral Crush & Covergirl Natureluxe Gloss Balm in 230 Coral.  I have been using the Baby Lips for many months now and I was content with their performance overall.  However, I was at Walgreens the other day and they had the Covergirl Natureluxe Gloss Balms on clearance for about half price, so I decided to try it out.  At first, judging by the pigmentation in the tube of the Covergirl, I really expected it to perform more like a lipstick, with very opaque color, not the sheerness it actually turned out to be, but it immediately reminded me of the Baby Lips in Coral Crush once I swatched it.

The Baby Lips are significantly less expensive than the Natureluxe, around $3-4, however, I prefer the Covergirl over the Maybelline in this particular color combination.  I picked up the Covergirl Natureluxe for $3.79 but the original price was $7.49 at Walgreens.  Now don't get me wrong, the Maybelline is a wonderful product and I truly truly love the one in Pink Punch, what a great product!  However, with the Covergirl in this case, I feel that the color has more of a pop, with less glossiness, so you can actually see the color better.  Also, in a side by side test where I wore one product on one half of my lips and the other product on the other half, I noticed the Covergirl stayed moisturizing much longer than the Maybelline.  After about 2 hours, I wanted to reapply on the Maybelline side, but only after 5 hours and after having lunch did I feel the need to reapply the Covergirl.  That's one thing that I did notice about the Maybelline (even in my favorite color Pink Punch), that I reapplied quite often, using up the product in a relatively short amount of time.  With the Covergirl I feel like I won't be using it up as quickly because it keeps my lips moisturized for a longer period of time compared to the Maybelline.

Overall, I would recommend the Covergirl if you find it on sale somewhere, I don't think I would pay $7.49 for it.  The Maybelline Baby Lips are nice products as well and even though this wasn't really a review on the color Pink Punch, if you come across it, you should give it a go, I love it.

I just thought this was an interesting comparison and hopefully it gave a little bit of insight into one or both of these products for somebody out there.  I hope this was helpful or interesting to you.

Thanks for reading!
Love,
Lainamarie91
Posted by lainamarie91 at 7:54 PM

Email ThisBlogThis!Share to TwitterShare to FacebookShare to Pinterest
Labels: makeup