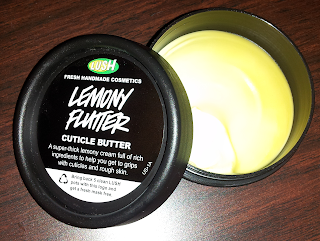 I don't usually like lemon scents because they can be overpowering and artificial smelling, but this stuff is not like that.  I had heard so many rave reviews about this product, but had strayed from trying it because of the name.  Once smelling it and realizing it wasn't a crazy lemony scent, I decided I'd pick it up.

I wouldn't say it absorbs quickly, but it also doesn't make your hands feel greasy all day.  I would say in a half hour, it has completely absorbed and no longer looks or feels greasy.  I usually hate lotions, etc. that don't absorb quickly, but I'm still giving this stuff a chance because, well, let's just talk about my cuticles... they are not in good condition.  They crack, and then once they crack, I bite at them. It's just yucky and gross, I know, but I'm really trying hard to get them to be pretty lol.

This cuticle butter instantly makes your nails and cuticles look better.  As soon as I put it on and rubbed it in, they are looking pretty darn good. :)

I've also been using it on my elbows and heels because they get somewhat dry too.  This stuff just makes your skin feel so nice and soft.  I have definitely noticed a difference on my elbows, so yay! :)

Week 1-2:
It makes everything look so smooth and nice when initially applied and for the majority of the day afterwards, but I honestly don't feel like it's truly repairing or making my skin better from the inside out, I feel like it just makes them look good, when underneath the lotion-y coating, they aren't any better than before.
After taking a break from using this everyday, I honestly don't feel like my cuticles are in any better shape than they were before.  I do think it has helped my elbows and heels (two rough spots) so I like this product for that reason, but don't find it to be anything spectacular for my cuticles.

1 Month +:
My cuticles, elbows, and heels all look 10x better than before I started using this product.  At first, I was not sold on it, but after an extended period of time, using it pretty much everyday (or at least every other day) I really love this product and I understand why everyone goes crazy for it.

Although it took me quite awhile to see real results on my cuticles, after a week or two, it was working wonders for my elbows and heels.  Give this product a go, but don't give up on it, I feel like it works better and better in the long run! :)

PS
I would honestly be willing to say if you only used this stuff just on your cuticles everyday for the rest of your life, you could probably still have enough left to leave to your grandchildren (if there wasn't an expiration date on it) after you die :-p .  A little really goes a long way.
Posted by lainamarie91 at 10:47 AM