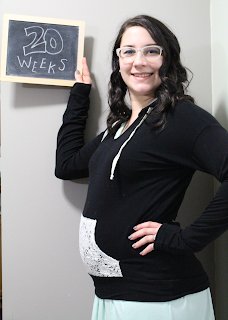 Doctor Appointment and the Big Ultrasound!:
This week was our anatomy scan. They didn't get to see everything they wanted to so we're getting another at 28 weeks! Yay! Also, the 28 weeks appointment will be my gestational diabetes test so at least Justin will be there to entertain me for the hour long wait. :)
Anyway, we got to see a lot of him. The spine was amazing! And his little heartbeat! His little feet and crossed legs! That was a lot of fun. From what they say everything was looking good, I just wish we got a good picture of his little face. 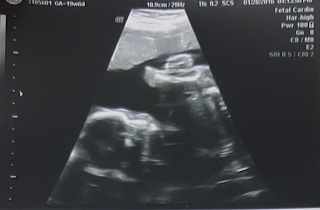 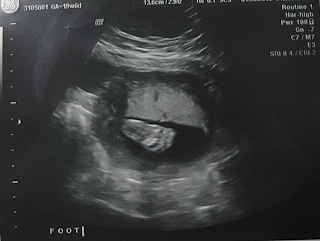 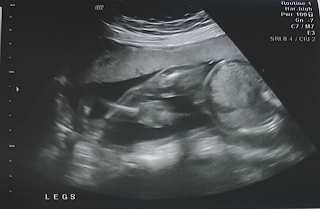 Bump:
I actually noticed last week that the bump was looking ever so slightly uneven. It was slightly bigger on the right side. Went to the chiropractor and she was massaging around my round ligaments and she said baby was chilling on the right side. So now I know why I thought my belly looked crooked. Haha. It's really so slight and Justin said he couldn't see it but I can tell. But in other news, the bump is growing so fast! Lol.
So they say at the 20 week mark is when your uterus finally reaches your belly button. I'm pretty sure mine is already way past there. At the ultrasound she was using the device way above my bell button. And way more apparent than that is that I can totally feel our little boy kicking about an inch or two above my belly button. My theory is because I'm short perhaps my torso is just tiny compared to the growing uterus. I don't know how accurate that really is, but I know my uterus must be higher than they say. They haven't measured my uterus at the doctor's office yet, so I'm not sure if it's bigger than normal or what anyway, I'm just making stuff up at this point.

Maternity Clothes:
No new purchases this week, and I'm starting to think I need to settle down on the maternity clothes shopping. It's getting a little excessive. And for now I really only wear cute stuff on the weekends, I just wear jeans and work provided shirts for work during the week. Now when the belly gets too big for work shirts, we might have a different situation, but we'll just wait and see. At the rate this belly is growing I bet we're going to grow out of the stuff I already have before it's all over with.
Ordered a maxi dress and maxi skirt from Target last week and finally got them in the mail. I just can't help but check the clearance maternity section every once in awhile. Lol.

Emotions:
I had a bad day on Saturday, but I kept it to myself and didn't drag Justin into it. My shoulder has been bugging me and we were cleaning for a little get together we were having that day. My shoulder was hurting and I couldn't properly clean the bathtub because it hurt so bad. So I kinda had a break down. But don't worry, I made an appointment with the doctor on Monday to see what's wrong with my shoulder.

Food:
I have been using the S Health app in hopes to keep the calorie count at a normal level since I've obviously been gaining a ton of weight already. I think it's working out okay, so long as I can remember to input what food I'm eating every day. One thing is, it's great for name brand foods that you buy because their database seems to be pretty big, but homemade stuff is a little more difficult to accurately track.

Sleep & Dreams:
I've been having dreams that I can feel Calvin moving from the outside. I'll wake up in the morning unsure if it was a dream or real because the dreams always tend to be of me laying in bed or on the couch and feeling him, so they feel like real life to me. Haha.
I had two really weird dreams in one night but can't remember them! They were strange. I want to say one of them had to do with running away from something stupid like bouncy balls or something. Haha.
But in the sleep department, it has been hard to fall asleep this week. I just can't seem to get comfortable. At the end of the week I tried sleeping with my Snoogle around my back and a body pillow at my front, that was nice, so hopefully that method continues to work. I was up tossing and turning Wednesday night for about an hour just trying to find a good way to lay and I noticed that every time I rolled over, Calvin would roll around too like he was re-positioning himself along with me. That was entertaining seeing as I couldn't fall asleep for an hour at like 2 in the morning anyway. At least Calvin was up with me. Haha.

Energy:
I have gone to bed early many nights this week. I just can't keep my eyes open when Justin and I lay on the couch after dinner.

Exercise:
Walked at the gym one day I got off early. It was nice because this time of year the place is packed, but going before 4 pm makes it a little better. I like going to the gym and walking but I also think about all the stuff I could be doing at home like making dinner, etc.
Ordered a yoga ball off eBay, and that's fun to use. Hopefully it will keep me motivated because I really enjoyed working out with it this week.
I only had those two workouts this week though. I had doctors appointments three nights this week so that kind of interfered with things.

Physical Symptoms:
Breathlessness has been back in full force for a couple weeks now. Just trying to talk and walk at the same time, I sound like I just ran a mile.
Also I have an increase in those pesky little right under the skin pimples. They seem to be concentrated around the mouth/chin area.

Movement:
So they say baby's hearing has really developed well by this time,or something along those lines. Anyway, I think that's totally true! I think Calvin can hear the outside world right now because over the weekend we had a lot of Justin's family over, including a bunch of kids, and Calvin was moving around like crazy while they were all there! I mean just crazy! Haha.
I also think I felt him move from the outside again, the night we were tossing and turning in bed. Still no luck for Justin though.
Also by the end of this week I am definitely referring to his movements as kicks because they feel much stronger than those weird little butterfly feelings we were having for awhile there. :) So that's exciting.

Favorite Moments of the Week:
Being up in the middle of the night feeling Calvin toss and turn with me was pretty entertaining. Then of course seeing him on the ultrasound! We couldn't get a good shot of his face or profile, but seeing his little hands move and his heart beating was just awesome.

Baby Purchases:
I don't know if I mentioned it last week but I ordered a dresser for Calvin's room last week. It's supposed to show up this week. It's super cute! Justin also got a rocking chair on Craigslist and he's going to paint it. With those two items, the nursery is pretty much finished. I can't wait to show you pictures! :)

What I Miss:
Sleeping on my belly, once again. The belly is just growing so fast!

Thanks so much for reading!
Love,
Alaina and Little Calvin
Posted by lainamarie91 at 4:07 PM