I feel like this month went by a lot slower than previous months, which is a good thing for a mom who doesn't want her baby boy to grow up too fast! 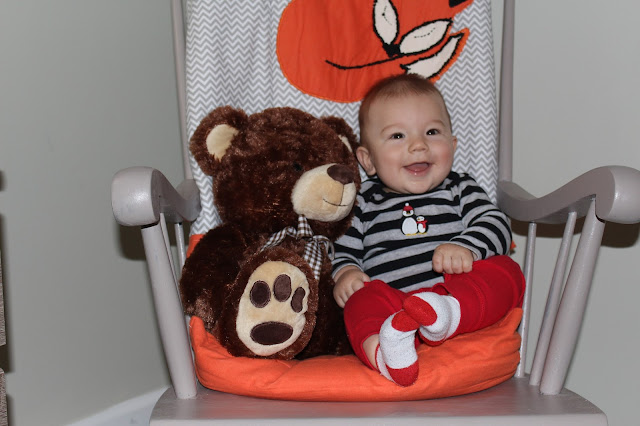 For me and my postpartum body, I have not been working very hard at getting back to normal. Not watching what I eat very well lately... Therefore, I am still stuck with 10-15 pounds to lose. My pants are still continuing to get looser, which is a good sign. I might not be losing weight but something is happening.

Mr. Cavin, is trying his very hardest to get up on his hands and knees. He gets up on his tippy toes and most recently his knees, but can't seem to get up on his hands at the same time, but he's trying his best! And he isn't army crawling yet either. But he is doing super well at sitting up on his own. Sometimes he does fall over, but more often than not he's sitting up for quite awhile and when he lays down it looks like he's doing it intentionally, not just flopping over. Lol.

He moved from the Bumbo to the highchair. He just kept trying to reach for things and bending in all directions, not to mention trying to kick his heels and escape from it. He's a big boy and his chubby little thighs sometimes get stuck when you pull him out, so we just retired that item before he got hurt.

We've been practicing with the sippy cup a little bit and he's very interested in it and cries if he drops it out of his reach, but I'm not sure if he really understands it because I'll put a little bit of water or breast milk in it (less than an ounce) and by the time he's done messing with it, there's hardly any gone. I was going to ask the pediatrician about what brand she'd recommend but totally forgot, so it's time to look up reviews! Feel free to leave any suggestions below.

He still nurses 6-7 times per day. He eats 2 meals of 2-3 ounces of baby food (usually lunch and dinner on grandma days, and breakfast and dinner on mom and dad days). He loves pretty much every food he's tried except squash. He's not a big fan of squash, but he doesn't super hate it or refuse it. And for our 6 month check up, I asked our doctor all about food and she told me that Cal can eat whatever (except raw honey) as long as it's not a choking hazard, so I can't wait to start making more baby food. The freezer is currently pretty full so I have to wait til we empty out some containers before I can make new baby food lol.

Calvin had his first sickness at the beginning of the month and that was so sad. It was just a little cold, but as a tiny baby whose main source of food is a liquid, it was hard for him to eat due to the stuffy nose. That was so sad. And he hated when I used the booger sucker device. But it didn't last too long, maybe a week overall and only 2-3 days of the sad little stuffy and runny nose. 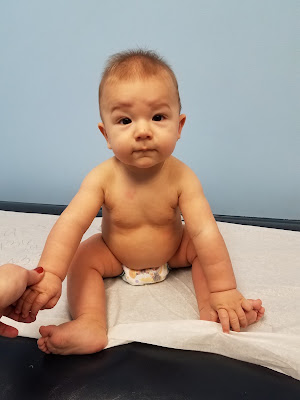 He seems to gravitate toward two naps per day, but sometimes he takes three smaller ones. His average nap is 1.5 hours.

We've been much more consistent about reading bedtime stories this month and having an actual bedtime routine. It's not fancy but Cal is really good about going to bed. Bedtime is 7 pm. If it's a bath night, we'll start that at 6, then read a bedtime story in his room, and head downstairs to start nursing at 6:30. I'm not sure if that's totally due to the routine or him just being a good baby. Sometimes I nurse him to sleep and sometimes he stays awake through the last nursing session of the evening and he still goes down really well. Just plop him in his crib and turn on the mobile and in less than 10 minutes he's out like a good baby. After our terrible 4 month sleep regression, I never would have guessed he'd be such a good night time sleeper. He still wakes once in the night usually sometimes between 1-3 am. And about once per week he'll sleep all the way through til 5 am. I always get my little hopes up that perhaps he's going to start sleeping through the entire night consistently, but that has yet to happen. Lol.

Overall, Calvin is growing so fast! He's a big healthy baby and we are so grateful and thankful for that. He's learning so much so quickly, I can't wait to see what the future holds for our little boy, but at the same time I want him to be little forever. :)

Thanks so much for reading!
Love,
Alaina