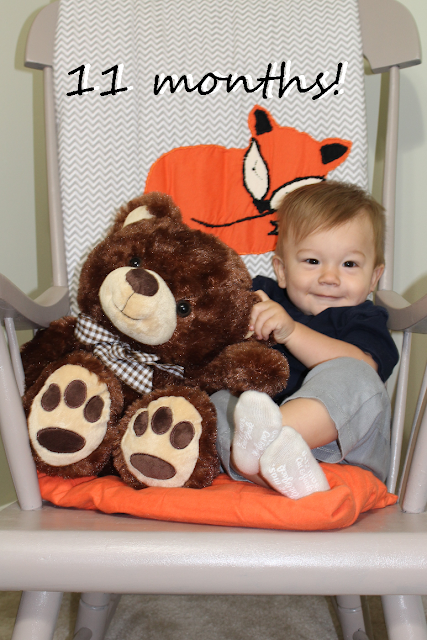 First steps
My precious little baby boy is an official toddler. He's walking like crazy these days! This month it's really hitting me that my baby is growing up faster than I could have ever imagined possible. Don't be surprised if I have a breakdown at your birthday party, babe! Haha.

"Hi Dada"
Yep, that's the story, isn't it? We carry them in our body, nurture them with all we've got for months on end, feed them with our bodies, love them with all our hearts, and their first word? No, not Momma. It's Dada. He even said "Hi Dada" when he came home a couple weeks ago. Thanks babe.
He also makes a "kee-kee" sound for kitty. We went to the zoo and he was saying it to the gazelles, so I'm sure he doesn't exactly understand what it means, but we're working on it. Haha.

Milk supply
I was so excited to have my period back around 9 months postpartum because we were wanting to start trying for baby #2 around Calvin's first birthday, but I seriously did not even expect to see such a huge drop in my milk supply. I've had two periods so far and for several days before my period shows up, I've seen a terrible drop in my milk supply. It even has Calvin waking up in the middle of the night to nurse (which he hasn't done in months). I went from pumping 6-8 ounces at work to 2-3! It was scary. I was afraid my milk was going to be gone forever, but it seems to be making a comeback now.

Tired of pumping
For the first time since going back to work at two months postpartum, I must confess I am genuinely tired of pumping at this point. I'm tired of worrying about my milk, taking supplements that don't help it, I'm just so done. I'm not going to just straight up quit this close to one year, but I'm counting down the days and keeping an eye on the frozen supply so I can stop pumping at work as soon as possible! Can't wait to wean from that pump! I love nursing Calvin, but I am just so tired of pumping! It's a tough decision though. I don't want to continue pumping at work after his birthday, but I'd like to still feed him on demand when I'm with him, I just don't know how my milk is going to work during the middle of the day in that scenario. We'll just have to see I guess.

Personality
Calvin is a very independent boy. He like never wants to sit still, he doesn't really like cuddling (unless he's nursing or super tired). It's so strange to already see that trait in him when he's so little. He loves to be on the move. He also loves to "talk" while you're talking. He just wants to talk over you haha. Before bed we read stories and he just talks and talks the whole time you're reading to him. I was even filming this update for my YouTube channel and he was very talkative the whole time. Haha.

First Hair Cut
I gave my baby his first haircut this month! At first I just trimmed around the ears and the neckline. After a week or two, I decided let's just cut it all. I did leave the top portion long, I like it long, and I didn't totally trust my own hair cutting skills enough to mess with the all important top hair haha. It was difficult. He is a squirmy boy. He was afraid of the sound of the clippers (I don't blame him), so I had to cut it by hand. That was my first experience cutting boy hair by hand so that was fun all on its own haha.

Weight loss
I had five pounds left to go last month, but I've since gained some of that back. I can safely say I'm about seven pounds from my goal weight right now. I was 127 when I got pregnant, my goal is 130 right now. I keep saying I want to be at my goal before we start trying for baby #2, but this is stupid! I keep having spurts of weight loss, then weeks of stagnation. Could I try harder? Yes. But I'm actually happy with the way my body is right now, so I'm not super concerned. Of course I'd like to start my next pregnancy at the same point as my last, especially seeing as I gained sooo much weight with Calvin haha, but I don't think I'm going to make it a definitive part of TTCing.

Weaning plans for 1+ year
I intend to keep nursing Calvin first thing in the morning and right before bed after his birthday and he can have cow's milk with the grandmas during the weekdays. He's still nursing five times per day. Sometimes if we have a really busy day he might only nurse four times. I think we're going to give up our middle of the day feeding next. That's the feeding he skips if he's going to skip one on our days together. So in a couple weeks he'll be down to first thing in the morning, before his first nap, after his second nap, and before bedtime. He loves food. He loves to eat what you're eating, he gets pretty upset if you try to give him baby food or even grown-up food with baby utensils or plates or bowls. He loves pretty much anything you eat, so he isn't really picky, but he doesn't like to be treated like a baby anymore. Haha. He likes to see you eating it along with him. Even if it's something he likes he doesn't want to be the only one eating.

I can't believe we're this close to his first birthday!

Thanks for reading!
Love,
Alaina
Posted by lainamarie91 at 11:23 AM