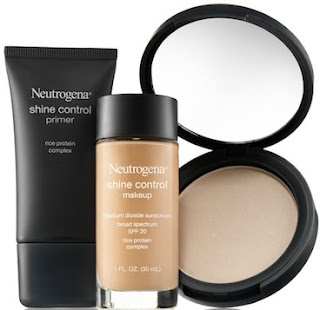 Here is my review on the powder & foundation from the new Neutrogena Shine Control line. I did not pick up the Shine Control primer because I have like three primers I haven't used up and I just don't need another one lying around too.

Powder:
Online, at Walmart this powder is $12, but at Target it's only $10. Just FYI, I thought it was interesting too, Walmart always claims to have the best prices. lol.  I didn't pick it up at Walmart because $12 sounded like too much for a powder in my opinion, but later when I was at Target, I was like "$10? Alright I guess I'll give it a go." :-p Yeah, that's the wonderful mindset of a girl who loves makeup. BTW, I had been looking for a new powder cuz my favorite favorite MILANI The Multitasker Face Powder

was running out and I figured it was time to switch things up. (I still love love love that powder, in case you're looking for one, it's just wonderful)

This powder works well along with the Neutrogena Shine Control foundation, but I think this is more effective as a touch-up/blotting powder on other foundations. It mattifies wonderfully.  It looks great as a touch up powder on Revlon Colorstay (whipped or original), but if I use it as a setting powder with that particular foundation, it tends to look slightly cakey.  However, it doesn't give that cakey look when I use it along with the Neutrogena Shine Control foundation, (and I'm sure that has something to do with the fact that these products are meant to work together).  However, I'm not really one to touch up throughout the day, I just let the foundation go, all I usually do is blot at lunchtime with ELF $1 blotting sheets.

This powder is soft and creamy and although it's supposed to be transparent, it does have a little bit of color and I could see how it could possibly be an issue for really dark skin tones.

Overall, I don't find it particularly wonderful or exceptionally awesome, but it is a nice powder.  It mattifies the skin well and if you like to use a powder for blotting, you might want to try it out.

Foundation:
Online at Walmart & Target, this foundation is $12.

This stuff is definitely light to medium coverage, I don't think it's meant to be full coverage and honestly, and it does look slightly flaky on dry spots (the only time I really have dry spots is after I have a zit).  So just based on that, I would not recommend this to those with dry skin. (I have oily skin, especially now in the summertime)
It gets me oily feeling after about 4 hours, but after blotting or touching up with the Shine Control powder, it's totally fine.
It works alright as a shine control makeup, but it isn't totally matte like Revlon Colorstay, for example.  It has the slightest slightest glow to it (when not set with the powder) which makes it look more natural than your typical matte foundation, but may deter some of us with oily skin who definitely do not want that glow, for fear of looking more oily than usual.  But I really wouldn't call it oily looking, it's just a very very subtle glow and I honestly haven't noticed any issues with looking more oily, I'm just saying if you're looking for a totally totally matte foundation, this one is not it, I would recommend Revlon Colorstay for oily/combo skin instead.  However, since it isn't totally matte, it does look more natural.  Now, I'm just rambling and repeating myself...

The texture is somewhat gritty (which you can feel when you apply with your fingers, but not so much with a brush), which can be weird, but honestly, it doesn't really bother me and I don't think it hinders the application process.  This stuff is very blendable, but on the other side of that, it just plainly isn't a full coverage foundation, maybe too blendable. It takes about two layers to get a decent coverage out of it for me, one layer is very sheer and just covers little imperfections.

The foundation itself is very thick, which can really make it a pain in the butt to get out of the glass bottle (and this bottle is still full, so I can't imagine what it's going to be like once it starts getting low). However, it doesn't feel thick or heavy on the skin when you're applying it or after application. That's one part that I found strange, judging by its thickness, I really thought it would have had more coverage or even feel heavier on the skin, but it doesn't.

It doesn't oxidize or turn a funky orange color at all; and I find that it doesn't really need time to set to adjust to its true color, what comes out is pretty darn close to what it sets to in a few minutes.  However I will admit this particular shade that I chose fits me well as far as the lightness/darkness goes, but it has more of a pink undertone, where I really need a more yellow undertoned foundation, but eh, it doesn't really bother me, it's alright for everyday wear (I'm a weirdo who has a more pink-undertoned face, but the rest of my body is more yellow-undertoned, so esspecially in the summer when you show more skin, I need a foundation to match the rest of my body). If I were to be going out to some fancy event, I'd use a better matching foundation, but I'm not too concered about it on an everyday basis.

Final Thoughts:
If you really want something from this line, I would recommend the powder because I find it to be good quality and it does what it says it does - controls shine and makes you matte!  However, I really don't think I would recommend the foundation because I have experienced bet
ter foundations for my oily skin at the drugstore.  As far as shine control goes, I'd recommend Revlon Colorstay oily/combo (if you like a super matte finish) or Revlon Colorstay Whipped (if you want a little more natural finish) over this.