Okay, can I just say holy smokes this week just flew by! Wow! And 25 weeks?! That just sounds like such a crazy amount of time! 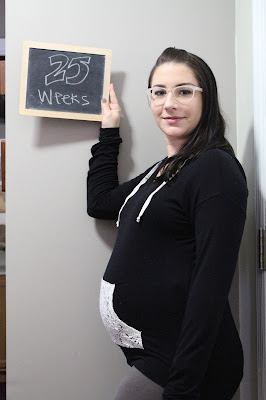 Bump:
I've really started to notice that sometimes the bump is really hard and other times it's pretty squishy. A cool new thing about the bump lately is that I can sometimes feel where Calvin must be sitting. Like lately he really likes my right side. I can feel the bump and my right side will feel hard and the left will be squishy. I can only assume it's because he's over there. That's where I feel his kicks really high up.

Maternity Clothes:
Had to retire a couple pairs of jeans that I bought in the beginning. My hips are either wider or fatter but getting those pants up past my hips is too much of a task, so I gave up on those.
Also thinking about retiring the two regular bras I bought at the very beginning (at least I got a good five months wear out of them, yay!). The underwire is killing me because my belly is invading my boobie area lol. Now I just gotta find some reasonably priced, flattering, and at least somewhat attractive bras to replace them with, otherwise I'll be confined to the sports bra-like ones I have left.

Emotions:
One little crying incident this week but it wasn't anything crazy.

Food:
I am so worried that I have gestational diabetes and I wish I could take the test right now and see, but I'm really watching what I eat. It scares me to death that I could be hurting my Calvin with what I'm eating. I thought I was doing so good lately but just wondering if he's big or if I have a lot of fluid and if it's caused by GD, I'm just freaking out. But with that being said, I am back to feeling like I'm starving to death at all times, which is seriously such a sucky feeling.

Sleep & Dreams:
I dreamt that we were playing real life 007 on old school Play Station (I have since been corrected by my husband, it's N64 not Play Station), what the heck? Also dreamt that I woke up to surprise snow! Surprise snow is seriously my favorite thing ever; when you go to bed not knowing that it's supposed to snow and you wake up to the most beautiful white blanket covering everything. Love that!
Dreamt that I gave birth to Calvin in my parents' living room... Yep.
According to my Jawbone Up Move I'm generally sleeping less, but I don't feel like I'm any more tired than usual.

Energy:
Let me just tell you about the walk Justin and I took on Sunday. It was a little longer than our usual walk and just when we were about the hit the home stretch, I needed to take a break. My back and hips were hurting. Plus, Justin's 5'11" and I'm 5'3" and he doesn't understand that he needs to slow the f down when we walk together. I take twice as many steps as he does. And trying to keep up while pregnant is so hard, it really is. I know walking is good for us all but my poor little hips and back wanted to give up not even halfway through. Haha.

Exercise:
Justin and I took a walk over the weekend and I went to the gym Thursday. So I only got two workouts in but they were both longer than most of my walks or workouts, so I still count it as a successful week. The walk with Justin was almost an hour and I spent 45 minutes at the gym (usually I'm a 30 minute and quit it kind of girl lol), so that's success in my book.

Physical Symptoms:
The rings have officially come off. After taking an hour long walk with Justin, my little hands were so chubby I totally could not get them off. So once we got home and settled down and my hands went back to normal I said, okay, it's time to take them off before they really get stuck. Lol. So that's that. And with spring finally on the way, warm weather isn't going to help the situation, so we're just playing it safe and I've got them on a necklace.
Indigestion has been back for awhile now. That's no fun.
Hip and lower back pain strike at all times. Haha. I understand it when I've been walking or moving a lot, but when I've been sitting around all day and it comes, I'm like what the heck, nothing helps.
Got an intense headache, wave of nausea, hot/cold battle for maybe an hour Saturday night for no reason... That was weird.
I know it's pretty early for most, but since my uterus is measuring big, it makes sense here. I'm already experiencing some rib pain.

Movement:
He is always hanging out on my right side. Whenever I feel him up high, it's never on the left. One of my favorite things at this point has to be seeing and feeling how much more powerful his moves are constantly getting. This week I can almost see my whole belly move when he moves in certain ways. He's still so tiny but getting so big at the same time! It's exciting. :)

Favorite Moments of the Week:
The week flew by so fast I can't even think of anything exciting that happened. Lol.

What I Miss:
Lots, but I'm also still loving being pregnant. I really hope I'm fortunate enough to keep this genuine happiness up until the end!

Random Thoughts:
On the radio this week I heard them mention June 11 for a particular concert in town. And just hearing that date I said to myself, hmm, that sounds like a pretty good birthday. I'm not gonna call this my magical mommy intuition, but I just want to record this in case he does come on that date I'll have some evidence. Haha. Hearing that date just really stuck with me.

Thanks so much for reading!
Love,
Alaina and Little Calvin
Posted by lainamarie91 at 1:48 PM