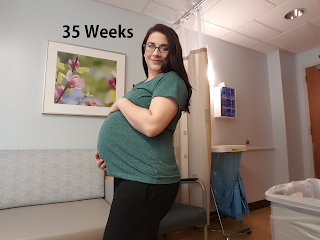 35 weeks! Every day and every week is such an awesome blessing! I cannot express how great it is.

In the Hospital:
As you may know, I've been in the hospital since 32+1 weeks. I'm here until our little Calvin comes. At the end of last week/beginning of this week, I've gotten a rash from the antibiotics they were giving me. This rash sucks. It sucks so bad. My hands, feet, belly, boobies, lower back, sometimes the backs of my legs, all itch like mad! It's especially bad in the middle of the night when I can't stop itching and go back to bed. They've been giving me Benedryl for it, but that just makes me pass out when I take it during the day. So I've been napping a lot. I don't know how much longer this thing is going to last but it's starting to look better, I don't think it's itching any less though. Anyway, that's the problem of the week. I just cannot tell you how much it sucks, I think it's really contributing to my overall mood being stuck here in the hospital.
I've been having weekly ultrasounds now. Two weeks ago they estimated his size at 5 lbs, 9 ounces, this week he was 6 lbs, 8 ounces. He's still measuring about two weeks ahead at this point. Although ultrasounds are not 100% accurate and they get even less accurate as time goes on, at least we know he is growing. My fluid levels have been very steady at the same amount ever since my water started leaking. So that's great! I don't know how that works. TMI warning, but the leaking fluctuates a lot. Some days it's quite a bit of fluid and other days it's not very much at all. It's good to see that even after a few days of heavier leaking, the fluid level is still the same as before.
The doctor still has faith we're going to make it full term. He refers to 37 weeks as our end point, even though he tells me there's really not much of a difference between 36 and 37 weeks, he would still like to make sure I get to full term. Although he really thinks I'll make it and we all hope I do, if I were to start going into labor on my own, he has no plan to stop contractions and prevent labor. For awhile there when they had me on the NST monitors I would have up to 6-7 contractions (that I did not feel) pretty regularly in that hour period of observation. These last few days I usually don't have any contractions and when I do it's only like three per hour. So things are looking good in that department too. Everything really is looking awesome and I thank God for that.

Bump:
This bump is getting gigantic! Holy moly, I feel like Calvin weighs ten pounds already. I don't know how this belly is going to get any bigger!
I can really easily feel where Calvin is and what side he's leaning toward. He can lay awfully crooked these days lol.

Emotions:
Not gonna lie, I really feel like this whole being stuck in the hospital thing is starting to get to me at this point. Sometimes I do get a little upset and I feel like all I'm doing is existing, my job right now is only to grow Calvin. I'm not contributing to society in any way right now. I'm not working and contributing to my family financially. I'm not making dinner for my husband or otherwise running a household. I'm just sitting in the hospital 24/7 growing this little boy. And while, yes, I am so thankful he's still in my belly and not stuck in the NICU, and yes, I want him to stay in my belly until he's strong enough to do everything he needs to do on his own so that he can come home with us, being stuck in this hospital room is really starting to get to me.
Wednesday night I couldn't fall asleep and I had a little breakdown. I really just wanted to go home so bad and I did cry about it. I cried because I missed Justin. And even more so, I cried because I felt so selfish for even feeling that way. I wished Calvin was here so I could just go home already. And I felt so terrible for feeling that way. I just got to the point where I was so unbelievably tired of the whole situation and it overwhelmed me that night.

Food:
If only there were new options on the hospital menu... Thank goodness for family bringing me lunch every once in awhile. Thank goodness! Hospital food sucks. I really do feel like my appetite is much smaller than during the rest of my pregnancy though.

Sleep & Dreams:
Kinda restless since getting the rash. I'll wake up early in the morning and not be able to fall back asleep because I can't stop itching. Then because of the Benadryl, I nap a lot during the day, then I can't fall asleep at night. So sleep has been kinda crappy lately.
I finally had some interesting dreams Wednesday night. I had two dreams with Leonardo Dicaprio in them haha. In one he was young, like Titanic young and he was playing one of the three stooges and they were on a bridge and it was muddy and in black and white.
In a very separate dream, that finally had something to do with pregnancy, I dreamt that I lost my mucus plug.

Energy:
Taking Benadryl for my rash is not helping my energy levels. I feel like a hobo most days. I get nothing accomplished. I'm taking my sweet time filling out the thank you cards from the shower. Haha. I'm almost positive our wedding thank you cards went out in less than a week! I'm a slacker.

Physical Symptoms:
I got a rash on the last day of the previous week that lasted until Wednesday of this week, one whole week of rash. All over the place; my back, belly, chest, my hands and feet were so itchy. They think it was the antibiotics they had me on. The Benadryl they're giving me just makes me pass out.
Pelvic pressure makes me feel like Calvin weighs ten pounds already. It's not constant though, some days it's worse than others.
Hip pain and achiness.
Still crazy oily skin, as always. No new zits in awhile though, so that's nice. Still having the scalp acne, that's been constant throughout the pregnancy.
My legs, ankles, and feet look magnificent lol. Bed rest does wonders for the swelling. My hands still look somewhat swollen, but holy crap I'm super happy with my feet, etc.
I feel like my boobies have been more sensitive, especially my nipples. I have even felt a tingling sensation in my nipples on occasion. And overall, I think maybe my boobs have gotten a little bigger lately too.

Movement:
Calvin's moving around just like usual. Sometimes I can feel him super low, stabbing my pelvic bone. And sometimes it feels like he's pushing to get out, there's so much pressure down there. Other days he has his knee or foot all up in my rib cage just hanging out super high up. I feel like he's moving in even less sudden, jabbing ways and more rolling, slow motions.

Favorite Moments of the Week:
Justin took me down to the hospital gift shop on mother's day and I actually got to walk around and look at things. I know it sounds so simple, but that really was nice. Not having to be pushed around in the wheelchair and getting to "shop" for a few minutes was such a nice change of scenery really.

Baby Purchases:
I gathered a few remaining things on Target.com from the registry. Gotta love the 15% off coupon you get for that stuff. Ordered a few little random things like a baby carrier, crib mattress protector, bottle drying rack, and a few other things.

What I Miss:
Doing normal everyday things. But this is only because I'm stuck in the hospital, not just because of pregnancy in general. I miss just shopping and walking around, cooking dinner, waking up next to my husband, all of these normal everyday things that I haven't been able to do for three weeks now. But it's okay guys, we're over the halfway point right now (if doc induces me at 37 weeks like we plan)! We can do this. But I can't emphasize enough just how nice it is to know there's an end point in sight.

What I Look Forward To:
Okay, since we only have two weeks left, let's discuss the stuff I can't wait for when I'm no longer pregnant. Yes, I can't wait to see Calvin and all that lovey stuff, but let's be real. Let me tell you why I can't wait to be done being pregnant.
Eggs over easy! I haven't had runny eggs in eight months! And in the same category: cookie dough. Mmm.
Swelling to go down and I can wear my rings again! I can't wait to see how much of my new-found chubbiness is fat and how much is water weight and swelling.
Sleeping on my tummy! Sleeping in whatever position I want. Not having to use the Snoogle.
Wearing real bras and shopping for nursing bras (I've been living in super comfy sports bra type bras for many months because the belly is all up in the booby area, let's just say they really aren't the most flattering haha) And I'm not going to lie, I'm curious to see what my boobies look like once my milk comes in and I start breastfeeding.
Having a glass of the homemade wine my parents and their neighbors made last fall! I've just been so curious as to how it turned out. Lol.

But there is one thing that I am not looking forward to: headaches. In everyday life I suffer from both intense and constant headaches all too often, many times per week. Being pregnant has been a magical cure for these headaches. I had a couple in the very beginning of my pregnancy, but overall, I haven't had them. I really think I've only had 2-3 that made me want to take medicine for them this whole time.

Thanks so much for reading!
Love,
Alaina and Little Calvin
Posted by lainamarie91 at 11:52 AM