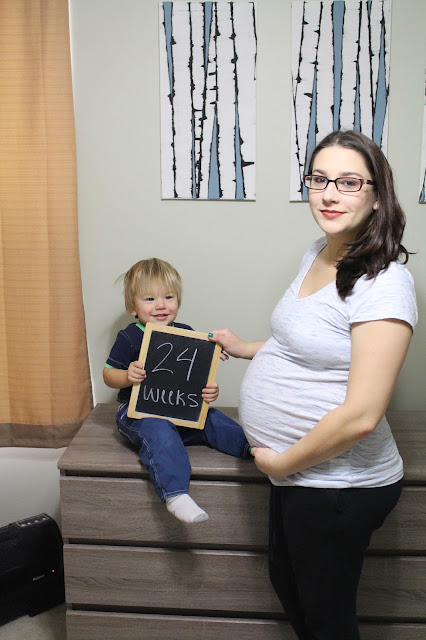 Doctor Appointments:
I was totally was not looking forward to seeing how big my bump is measuring, but I met with the midwife, not the doctor and she's much more relaxed so she didn't make a big deal out of it. She did say I was measuring big, but I didn't bother to ask how big. It feels like Eren could be up into my rib cage in the next week or so. I don't remember that this early with Cal!
I had a MFM appointment and my regular OB right afterwards. Justin was able to stay home with Calvin so I didn't have to worry about dragging him along, which was nice. I got to enjoy the ultrasound time.
Cervix is measuring at 3.8 cm, which is awesome. Eren is estimated to weigh 1 lb, 7 oz now, which is ahead, but not unexpected because he's been about a week ahead the whole time, plus Calvin was a big baby. The midwife says Eren will probably be over 8 pounds too, but that's no surprise.
Got some cute profile shots of little Eren and my sister is convinced he has our nose, so he's going to look like me, not Justin. Calvin is totally a Justin twin baby, so of course I'd be happy to see what a little me baby would look like. Lol.
I heard Eren's heartbeat at the MFM ultrasound and recognized it as about the same tempo that Calvin's was at. I spent weeks 32-37 in the hospital with Calvin listening to his heart rate being monitored twice daily, so the 138-143 bpm range sounded super familiar to me. It was cool to recognize it and remember listening to Calvin like that many, many times.

Bump:
Ordered a support belt. It can be irritating to wear constantly all day, but I do think it's helpful. It definitely helped on a walk.
Otherwise, the belly doesn't really look that giant, I guess, but it sure feels huge.


Energy:
Chasing around a toddler is hard work man. Plus my hip and back hurt a lot lately, so chasing a toddler when you feel like an old lady is super hard.

Physical Symptoms:
My left hip hurts pretty much every day and it sucks. Why do I feel so achey already? And it's not only in the evenings, it can be achey in the middle of the night when I get up to pee and first thing in morning when I roll out of bed. It's sucky. I was actually reading back through my updates with Calvin and I was feeling achey at this point last time too, which surprised me to read.
I've had my first leg cramp the last day of this week. I was stretching in bed in the night and it was just a split second but it reminded me of how sucky those leg cramps are! Haha. I thought I was going to get away without having them this time.
I've had a couple zits this week on my chin, which is pretty unusual for me.

Food:
I haven't been as good as I have been in the past. Instead of coming in with 100-200 calories left each day, I've been using up every little bit and sometimes going 50-100 calories over. Not a good habit to get into, especially since we're still in the third trimester here.
As I've experienced pretty much this entire pregnancy, there are just some days when what we have planned for dinner totally does not appeal to me and we have to switch things up. I might have looked forward to this meal for a couple days but when the moment actually comes, I don't want anything to do with it. Haha. Crazy hormones.
Justin and I stocked up on some ice cream we both like. Lately, we have been going out to get ice cream maybe once or twice a week, but at least this way we will be spending our money a little better by eating at home. I love cookie dough ice cream with Hershey's chocolate syrup. I even added some crushed up Keebler Striped Fudge cookies. Yummy!

Sleep & Dreams:
Sleeping on my side is getting easier. This belly is just getting so big.
Had some super weird dreams this week but can't seem to remember them all. I feel like it's been awhile since I've had some weird ones.

Favorite Moments of the Week:
Seeing Eren on ultrasound and chatting with my sister about how he might possibly look like us instead of another Justin clone. I'll probably have my hopes up this entire time that he's going to look like me, then when he's born, he's totally still going to look like Justin and Calvin lol.
I actually told Justin this past weekend that I thought Calvin was looking to have a little more of me in him as he's grown up. I think he has my chin. I always joke with Justin that we're going to have the best looking kids in town. We live in a pretty small town, but that does not detract from my statement! Haha.

Been wearing more makeup this week. I got a few new products and have been excited to try them out each day. It's nice to get back into that sometimes. We've been really good at budgeting and not spending money on random stuff this year, but it's nice to just treat yourself sometimes.
I looked back on my 4 weeks pregnant post and remembered how bad I felt in the beginning for removing Calvin from his only child position. I felt so guilty, like I was ruining his whole world. But I am so glad I don't feel that way anymore. I cannot wait to see these brothers interact. I hope they grow up to be just as close as me and my sister are. I hope they learn to forgive each other and always have each others' backs and are the best of friends. I am so happy they are both of the same sex and they get to be so close in age. I really just can't wait to see them grow together.

Love,
Alaina & Baby Brother Eren
Posted by lainamarie91 at 11:06 AM