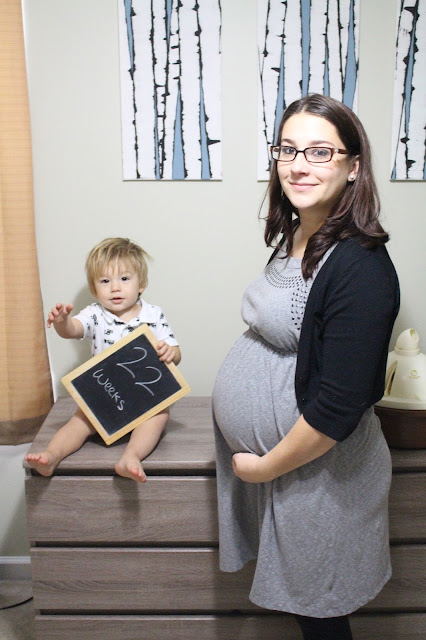 MFM Doctor Appointment:
Calvin came along this time, and although he did super awesome at the last ultrasound, he was not having it this time around. Therefore, the ultrasound tech worked as quick as she could and we didn't get to just stare at baby brother and marvel in his cuteness like we sometimes do. Haha. Since Calvin wasn't having a good time, I totally forgot to ask how my cervix was measuring, but I did get a glimpse at the screen as she was taking the measurement and it looked to be over 3.5 cm, which is good. Everything else seemed to check out fine.

Bump:
Should I get a support belt?
Should I buy more pants?
Why are these pants already driving me insane?
But in other news, Eren feels like he's already newborn size. He is so strong. There are times he kicks where it literally scares me because he's only supposed to be this tiny little one pound baby and yet he can really pack a punch. It seems as if he went from just fluttering around in there to trying to claw his way out in a matter of days. Some days it totally feels like he's trying to dig through my cervix. I remember Calvin would always be up in my rib cage with his little feet and I thought that was bad, but holy crap, stabbing my cervix is way worse. Haha.


Energy:
Calvin tires me out man. But I will say, it's great motivation to try and not gain a million pounds. I can't imagine what chasing two of these boys is going to be like!

Food:
This was Thanksgiving week. Let's just say the whole counting calories thing was totally thrown out the window and the scale showed it!

Favorite Moments of the Week:
Calvin had so much fun at his great grandpa's in the country this Thanksgiving. He loves it down there. Being outdoors is the best thing for that kid. He hadn't napped all day but was still a joyous little boy. If we had been couped up inside under those circumstances, there would definitely have been a meltdown.
Calvin woke up early on Tuesday this week, so we laid in bed together for a couple minutes. It's the only time this guy will cuddle with me, when he's super tired. He is usually constantly on the go. It was nice to just lay with him, knowing we won't have many moments just the two of us like that in a few months time.

Seriously, how am I going to be able to keep up with two crazy little boys?!

Love,
Alaina & Baby Brother Eren
Posted by lainamarie91 at 11:02 AM