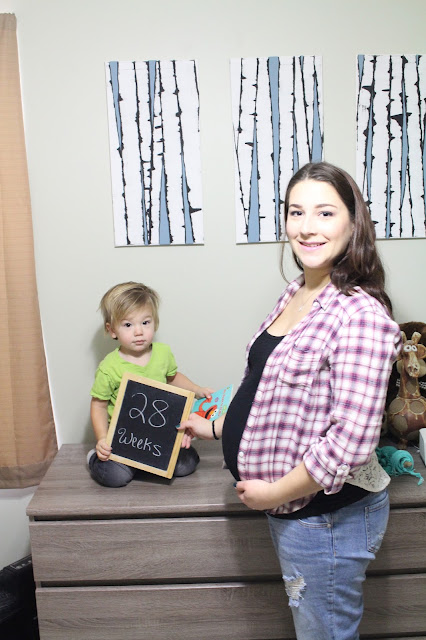 Third trimester, how I've waited and waited for these days! My belly is enormous, my body aches, but I know we are in the final stretch and I'll be meeting my baby boy soon! I feel so much calmer and ready to meet my baby, yet these are the days when worries about delivery start to creep in.

Bump:
Had to start turning to the side to do things like washing dishes. The belly takes up too much room in front, so I have to stand sideways to make things easier. Haha.
It also feels like my ribs are expanding. They can get achey around the sides and back and just feel like they're stretching out.
I can totally tell how Eren is laying in the belly, not just by how it feels but also just looking at the bump. The bump is looking uneven these days. I don't think he has a preferred side yet though, he seems to switch back and forth plenty.

I can feel and see his little body parts like feet and knees way better than I ever remember with Calvin and I think it's finally occurred to me why! My placenta was in front with Calvin. That must have been why his little body parts never protruded like Eren's do now. For the longest time that never occurred to me. I thought perhaps I wasn't remembering correctly, but I'm pretty sure this is the case. Very cool.  So at this point with Mr. Calvin, I was up a total of 33 pounds... what most people would have gained the whole time. And I was doing really good there for awhile this time around, but Christmas didn't help things so my official total up until the third trimester this time around is... 31 pounds. Super. I've been eating sooo much better this pregnancy, yet I'm still essentially in the same exact boat as last time, so that's not very encouraging.
Weight gain totals so far:
13 wks up 5 lbs
19 wks up 15
24 wks up 23
28 wks up 31

Doctor Appointments:
Got to see Eren in 3D at the ultrasound and it was so amazing. It really was too cool watching him move around in there! We got some really good pictures too. As soon as he popped up on the screen I said, holy crap he looks exactly like his brother! But after examining the pics a bit more, I think they have some differences. I saw him lick his umbilical cord and he had his hands up in his face a lot. We got some really clear pictures of him and it was super cool.
Eren is measuring 2 lbs 12 oz, a week or two ahead of schedule, which is where Calvin was at at this point too.
I was able to leave Calvin with his grandma because I had the MFM appointment, then immediately my regular OB appointment, where I had to wait around for the gestational diabetes test, so I didn't want to risk Calvin having a bad day with two really long appointments back to back.Bonus: I was able to really enjoy the ultrasound all by myself.
Amniotic fluid levels were "generous," so they're having me back in three weeks to double check on them. They were "borderline" high with Calvin too.
Cervical length was good, but I didn't catch the actual measurement.
Now it's time to see my regular OB every other week.
The midwife is still confident we can try for a VBAC. She suggests that after we hit 36 weeks and I have my last dose of Makena, I start doing more activities to try and get myself to go into labor naturally, that way I'll have a much better chance at a vaginal delivery as opposed to being induced medically. When I think about the 36 week mark and the fact that it's only 8 weeks away that gets me so excited. April seems like forever away right now, but 8 weeks just sounds so much closer. I realize it could still take another month after that point, but the countdown is underway!
Plus no news is good news on the GD glucose test, so I guess we are in the clear. :) 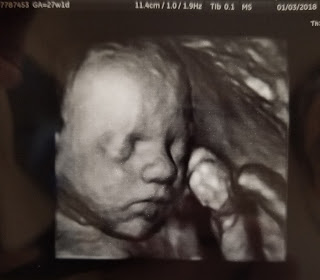 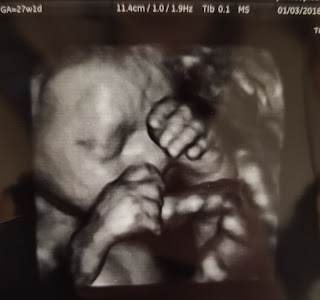 Energy:
Still feeling awfully tired.
I seem to be getting more short tempered with Calvin this week too, which totally bugs me. I hate snapping on him, only to immediately apologize to him for being mean. I wonder if this is being caused by my lack of energy, I just can't move around like before. I am trying not to pick him up as much because I keep getting Braxton Hicks when I do because he's a 30 pound toddler. Plus it hurts my back picking up his toys all the time, so I'm asking him to help out more. He's usually very helpful, but I think those two things are just a hard transition for us both. He wants to be held and gets mad when I don't pick him up, so I get mad at him for being whiny. I try to be patient with him when I ask him to help clean up, I like to let him do it on his own time, but sometimes it just feels like he's literally deaf and does not hear my requests. It's just a sucky cycle at this point.

Physical Symptoms:
As I mentioned last week, I'd been having many more Braxton Hicks contractions just doing everyday things like lifting the laundry basket or getting up off the couch after sitting awhile. The midwife at my doctor office showed me an exercise to do daily to help with the contractions. She made them sound very normal though, especially for a second pregnancy, and told me to only worry if they were continuing despite rest and hydration, occuring 6-8 times an hour.
Don't want to jinx myself here, but last week I mentioned my back and hip were feeling better and they has continued feeling good this week too! The one thing I can think of that I've been doing differently and may be making the difference is that I brought out my yoga ball and have been using it nearly every night before bed. I sit on it to open up my hips, roll on my chest to let my belly hang, or lay my back on it to let it lengthen out. I haven't been great about doing my once weekly exercise day, but at least I'm getting in a bit of stretching every night with my yoga ball.

Food:
Keeping up on counting my calories after the terrible holidays. I've even given some thought to the idea of trying out a gestational diabetes friendly type diet, to see if it would help Eren not grow so gigantic, but I go back and forth with that one a lot. Calvin was giant, but he continued to be in the 95%+ once he was on the outside too, so that makes me think he's just meant to be a big boy, there wasn't anything that I caused, so I just assume Eren will be the same way. And I think what about my amniotic fluid? Maybe if I tried to eat this way for the next 2-3 weeks and they go back to check my fluid levels and they look better, that would tell me that my eating habits are helping out. And then there's always this part of me that says, it's only three more months, just do what you want. And that part isn't constructive haha.

Sleep & Dreams:
It's been hard to get comfortable in the night. I haven't mentioned it yet, but it's been going on for probably two months already, I've been peeing twice overnight instead of the usual once.


Favorite Moments of the Week:
Seeing Eren on ultrasound in 3D. :)

Random Thoughts:
Part of me wants to start washing the baby clothes, but there's this other part of me that wants to wait until 32 weeks, just as some kind of crazy superstitious act that might prevent my water breaking at the same time and everything turning out exactly like with Cal. I don't even know if that makes any sense. I feel like if I get things ready too quickly, like I did with Cal, it could cause Eren to come early, like Cal did. But for real, I want to start going through the baby clothes!
Justin and I agreed that in February we would start Calvin's transition to his new big boy room. So it would make the most sense to wait to get the baby stuff out until Calvin is settled in his new room, so we still have a few weeks.