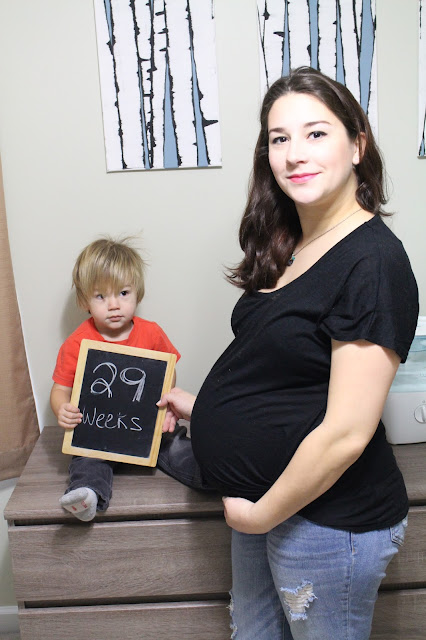 Bump:
I've been hovering right around the +30 lb mark these last couple of weeks. I've been watching my carb intake and definitely not snacking like I used to. I'm waiting to see if the diet change helps my generous amniotic fluid levels (ultrasound 1/24 to measure them).
Had to scoot my car seat back a notch to accommodate the belly. I drive a stick shift and need to be able to reach the clutch and I'm pretty short so there are only so many notches I'm going to be able to scoot back. When I was pregnant with Calvin I went to the hospital at 32 weeks, so I'm unsure how much adjusting will need to be done before the end haha.


Energy:
Not too bad, actually.

Physical Symptoms:
I don't think there's anything to update on. Everything is going really smoothly.

Food:
As I've mentioned before, I've been concentrating on eating less sugar and carbs. Now because of this, I've noticed a decrease in my daily calorie intake. Crazy thing is, I don't feel more hungry. I am definitely eating less calories, but because those calories are coming from meat, dairy, and produce instead of sugar and flour, etc. I feel just as full on less calories. It's crazy. And it's not like I'm completely denying myself treats either, I'm just choosing different treats. Instead of cookies, I have peanut butter on celery. If I want something sweet for breakfast, instead of having cereal, I am choosing oatmeal. Yes, I've had a bowl of ice cream a couple nights here and there, but overall, I am just super proud of myself for feeding my body and my baby way better nutrition.
I use an app called Lose It to track my calories. It allows you to put in your own recipes which is super helpful. Before I started this diet, if I had an extra 300 calories left in my day after dinner, I would snack until I used all those calories. Now that I've started to give more thought to my diet, if I'm not hungry, I won't use up those remaining calories just for the sake of using them all. Now that's a big difference, especially because before those last few hundred calories were nearly always junk food, and right before bed, the worst time to be packing on the calories.

Sleep & Dreams:
Falling asleep can still be sucky, but it's not like I spend hours awake, so I should be thankful.


Favorite Moments of the Week:
Walking down the hallway one morning this week, I glanced over at both of the open bedrooms, and seeing the two nightlights shining in the dark, it really occurred to me that we're going to have TWO boys here in a couple months. TWO kids! :)
Our sweet Calvin is officially a big boy now. As of this post, he's slept two nights in his big boy room, in his full size bed, and he has done awesome so far!

Random Thoughts:
I really really hope this new diet will help my fluid levels. I wasn't instructed by my doctors or anything, it's just something I thought about with Calvin and decided to actually implement this time around since my fluids are high again. I've read that some women are instructed to change their diets when they have high fluid levels, so I figured I might as well give it a go. I've also read that women with gestational diabetes can end up plateauing on their weight gain because of the diet switch. So that makes me feel better about the fact that I haven't gained anything in a couple weeks.

I really don't want things to turn out like they did with Cal, I want to avoid being in the hospital for weeks! I don't want my waters to start leaking early! And although my doctor has never officially blamed the high fluid levels for that, I can't help but think it. Even though the diet is hard, don't get me wrong, I love sweets and carbs, I can't wait for that ultrasound to see if it actually helps my fluid levels.

The diet feels easier because I keep telling myself it's only a couple more weeks. However, of course, if it turns out that my levels are better after eating this way, I'll have no choice but to continue the diet until the end, knowing that it's beneficial to myself and Eren. But by that point, it will only be another two months, which is still totally do-able. If I look at the diet in these segments instead of like it's a forever thing, it totally makes it feel less daunting. This strategy is also something I'll have to keep in mind when it gets to be time to work on losing the baby weight. Plus that's another thing, if I keep eating better while I'm pregnant, it will make losing the baby weight a little bit easier, especially since I started out this pregnancy ten pounds heavier than I wanted to be. Overall, I know the diet is for the best in all aspects, it's just hard because I definitely have a sweet tooth ha.
Love,
Alaina & Baby Brother Eren