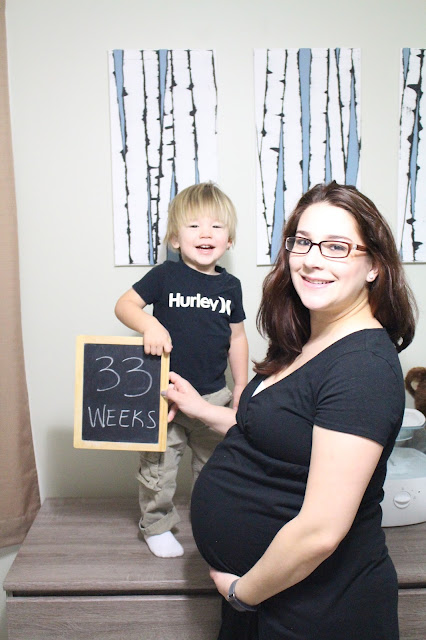 Bump:
Can I just wear dresses from here on out?
C-section scar ache every once in awhile. Sometimes it just feels like the normal, underwear/pants are tight in that area, but other times it really feels like the ache is coming from the inside out.

Doctor Appointment:
Had a biophysical profile ultrasound done. Last week Eren wouldn't do the practice breathing, this week he was doing it like crazy.
Fluid levels are still high but I didn't get a number from the ultrasound tech.
NST went well. No L&D rush like last week.

Physical Symptoms:
Backache is back. I have been slacking on the yoga ball since the L&D scare. I sometimes get contractions when I'm on the yoga ball so I've been avoiding it.
Round ligament pain hasn't really been an issue at all this pregnancy, it was much more prevalent with my first son. So it's just appeared out of nowhere this week, which is weird.
I think I have some very light belly stretchmarks coming in! I hadn't gotten any new ones so far this pregnancy and was actually thinking and hoping I'd get off Scott free, but nope.
In the shower one day I felt like I had a letdown in my right boob but didn't have any leakage.
Had a bad headache one day, haven't had one of those in awhile, so that was weird.
A lot more hip discomfort when I get up to pee in the night or first thing in the morning. It's like a looseness but also acheness. I guess it's just a shock to my hips to have to get up and move after laying all night, because I don't really get the feeling during the day.

Food:
I've been somewhere in between the low carb thing and last week's "just eat whatever you want" thing.

Sleep & Dreams:
It's getting harder to fall asleep. Getting up to pee literally one million times per night. If I drink just one little half glass of water before bed, I will be up all night peeing. But I've been so thirsty lately, especially in the night!

Favorite Moments of the Week:
Leaving my doctor appointment at MFM and not being wheeled down to labor and delivery. No joke. I was so worried things would happen like they did last week, but this week's appointment went very well.

Random Thoughts:
Packed and filmed my hospital bag video. It's in the car ready to go! Though I pray we don't need it for another month at least!

Love,
Alaina & Baby Brother Eren
Posted by lainamarie91 at 7:55 AM