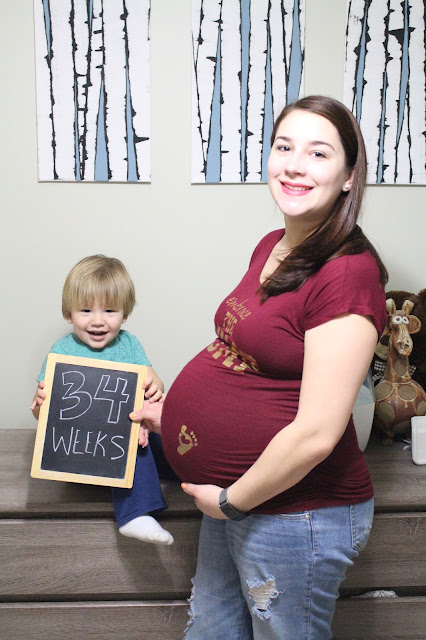 Thirty-four weeks! I want this boy to cook at least three weeks longer, of course, but 34 weeks puts my mind at ease a lot, honestly. I know if he came right now he'd be in the NICU, but it wouldn't be a terribly long stay (God willing) and he'd be mostly great and healthy. I can't wait to meet him but I want him to be able to come home with us from the hospital when he comes. Thirty-four weeks is also scary too because they won't try to stop labor at this point. That worries me because of the L&D stay I had at 31 weeks. I wonder if that happened again, would they make me stay and deliver?

Bump:
Some days I miss my anterior placenta (that I had with Calvin). I felt so much less direct movement. Like if I'm uncomfortable, having some contractions, or don't feel well, feeling Eren move around like crazy makes me feel even worse. I love that I can feel him so well, but at the same time it makes me nauseous just to watch his little body parts floating all around my belly lol. There are just times it's so uncomfortable for him to be moving around as much as he does. It almost feels like he'll sleep an hour, then literally be up for an entire hour, all day log! It's exhausting lol.
Also, I don't know if this bump has dropped or what, but holy crap, it feels soooo heavy on my pubic bone area. It feels like my bump is sitting directly on my lap when I am sitting, and driving is becoming hard.

Doctor Appointments:
These were the two most positive appointments I've had in a long time, it feels like. At MFM my amniotic fluid was measured three times ranging from 21-24 cm. Which is an improvement and technically takes me out of the "polyhydramnios" class, if only barely. What's considered high is 25 and over. I also only had one contraction on the NST which is super awesome. My contractions have been very limited since they started me on the procardia medication, I'm so glad it looks like it's working well! I got to see his little tiny baby hair on ultrasound. I can't wait to see what color it is!
At my regular OB, my uterus was still measuring big, 38 cm at 33 weeks! My doctor let me know that either hospital I go to has a level II nursery which means if baby comes early, he will be fine to stay there, unless we have some serious problems that she doesn't anticipate. She is still worried about me going into labor early because my uterus is measuring big and my body will essentially assume I'm full term and ready to go because my uterus is measuring that way. She was happy to hear my fluid levels were looking slightly better and she said having been diagnosed with polyhydramnios wouldn't affect my chances at a VBAC. And she said the headaches I've been having are a common side effect of the procardia pill they have me on to prevent contractions. She said I'd be able to come off that medication at 36 weeks, along with the Makena shot. Speaking of the Makena shot, we only have 3 to go! Ah! We're really down to the wire here. My next appointment with her isn't until March 1. If we make it to that appointment I will be oh so happy. I pray every day we get to March, my mind will be able to rest so much easier once we get to that point. Then Eren will be 35 weeks and a couple days, although of course I want him to make it to 37 at least, I am still counting my blessings for each day he's still in my belly, knowing each day in there is saving him two days in the NICU.


Energy:
I've been filming YouTube videos like a crazy person lately haha. I just feel so inspired and want to take advantage of that while I can. I've been getting a lot of feedback from my audience lately and I try to make videos based on their questions. I take every opportunity to film. First thing in the morning before work, while Justin is putting Calvin to bed, and random times throughout the day, I've just been able to harness that desire to film and use it to my advantage. It's been a lot of fun. Even though I am so tired in every other aspect of my life, I'm glad I am able to enjoy my hobby still. :)

Physical Symptoms:
So much heaviness and pressure in my pelvis. I feel like I have to pee twice as often.
Achey boobs. That's a new one. I've had nipple sensitivity throughout this pregnancy pretty much, but all of a sudden this week, the boobs are feeling achey and kind of sore to the touch, especially on the armpit sides.
Is the oily skin returning? It's been pretty good this time around compared to with Calvin, my skin was so oily with him it was insane. And my skin was oily in the beginning with Eren. Perhaps it's just that spring is on the way, the air is getting a little less dry, so my skin is getting more oily.

Food:
I don't know if it's a coincidence, but it feels like hunger brings on contractions for me. Every day sometime in the middle of the day either right before lunch or right around 2-3 pm, I have an hour or so with more contractions than the rest of the day. The procardia medication is helping, compared to beforehand. I try to snack more and keep my belly full but it's hard when you're not actually feeling hungry.
Acid reflux. It's been a lot worse in the third trimester, and worse than with Calvin if I'm remembering correctly. I've noticed a couple things that tend to make it worse: buffalo sauce, salsa. I love buffalo sauce. We almost always get boneless wings for an appetizer when we go out. I love buffalo chicken salad and wraps and pizza. And I used to love having chips and salsa for an after dinner snack, but the closer I have those foods to bedtime, the worse the reflux seems to be. That's crappy. I don't remember ever having food related problems like that with Calvin.

Sleep & Dreams:
Sleep is still going pretty well. Once again, like I was with Calvin, I'm super thankful my sleep hasn't been bad throughout this pregnancy. Yes, I have some weeks where things are sucky, but I know that so many women really struggle with this throughout pregnancy and I'm so very happy I have gotten off pretty easy both of these pregnancies (at least so far).

Favorite Moments of the Week:
Having good doctor appointments. I just felt super happy leaving them both. :)
It was 30th Justin's birthday over the weekend and I organized a little surprise dinner with his siblings and mine. I was so proud of myself that I actually pulled it off. I'm super bad with secrets and I just never thought I'd be able to do it, plus Justin's usually super attentive and figures things out too fast. So last minute it turned out the place we wanted to meet at closed down! So I had to figure out where we would go instead, literally just minutes before we arrived. So stressful! Haha. I was so scared this awesome plan was going to be ruined literally last minute, but it all worked out and he didn't even suspect a thing! :)

Random Thoughts:
Justin got Eren's name sign finished and hung it in the nursery. I kind of saw that as the symbolic finishing touch for baby's arrival.
I miss going for walks. The weather is finally starting to break a little here lately (one day it's 60, next day it snows lol) and when it's nice out, I just want to take a little walk. But my doctor said to limit walking, plus I know I get a ton of contractions when we go for walks too, so it needs to be avoided. I just pray Eren holds out until 37 weeks, then we can start walking again. We can do whatever we want if we can just make it to 37 weeks! :)

Love,
Alaina & Baby Brother Eren
Posted by lainamarie91 at 8:52 AM