The Transition from 1 to 2 Kids 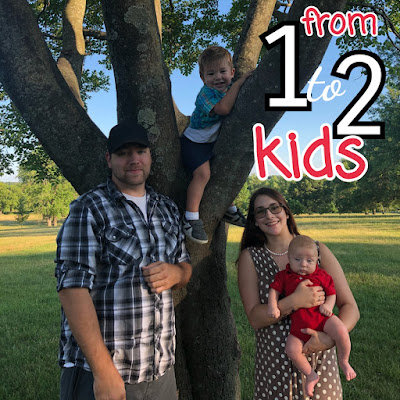 Was it easier or harder than expected?
I think it has been about as hard as expected but perhaps in different ways than I thought. For example, I thought having to sit down and nurse Eren while trying to make sure Cal wasn't doing something he shouldn't be was going to be hard, but that's actually not bad. Cal is very independent and he seems to understand that I can't really help him a whole lot with a baby attached to my chest. He understands he has to wait for me to get him a snack or fill up his cup and he's been really great in that aspect. However, the hard part has been when they both cry. Eren was colicky for the first 2+ months. When Eren cried, Calvin would cry, and vice versa. They just feed off each other's sadness. I was not expecting that. Listening to two crying kiddos, not being able to figure out what's up is really hard. It makes you want to just walk out the door and leave them to fend for themselves some days...
And the extreme exhaustion was unexpected. Chasing a toddler is hard. Caring for a newborn all hours of the day is hard. But both of those things together? That sucks.

Do you love them both equally?
I have to be honest. When Eren was a colicky little newborn, I did not feel an ultimate, bonding connection with him. I talk about that more in my "love at first sight" video HERE. But once we overcame his super fussiness at 2.5 months old, I can honestly say yes, I have a ridiculous amount of love for them both and it's incredible. I can honestly say now that yes, I do love them both equally.

Did Calvin understand? How did he react?
I definitely underestimated that little dude. He was almost 22 months old when Eren came. I think he's had a much bigger understanding of this whole thing than I knew a little boy could. I truly feel like he understood the pregnancy more than I thought. He's never patted my belly and said "brother" since Eren was born. He knows brother is on the outside now. And he's never been mean to Eren. He's never acted like he was mad at him. He's never acted like Eren needs to leave or he doesn't belong. He's never seemed overwhelmed by the fact that sometimes I just can't get to his needs as promptly when Eren needs something. Overall, I know he really gets it. He just knows Eren's part of the family now.

How do they interact together?
It's more amazing than I expected. Seeing Calvin give Eren kisses is literally the best thing ever in the world! It's perhaps my favorite part of being a mommy right now.
Calvin loves his brother. He is always asking about him. If I'm laying around with just Calvin and my husband is off with Eren, Calvin asks about him. He says things like "baby brother sad, hungry?" It's just too cute to see his concern for Eren.
And Eren is finally starting to notice Calvin more too, here at four months old. He will watch him as he walks around the room. He gets so happy if he lays by him on the floor. He cries when he leaves him. He actually cries when anyone leaves him.

So overall, things have definitely been different than I expected, but not all in negative ways.
I hope you enjoyed this little post.
Love,
Alaina