Dude, this is going by way too fast! 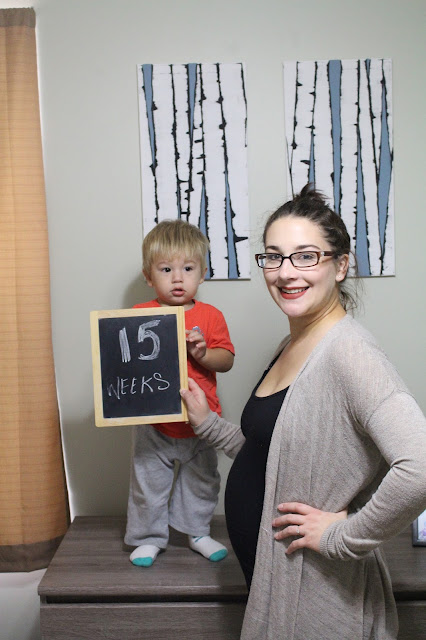 Bump:
Officially up 10 pounds. :(
This is the week my bump really popped with Calvin. I feel it's happened this time around too.
Finally feeling some real movements more consistently, not just the little flutters.


Energy:
This is the week my energy started to return with Calvin. I think it's starting to return a bit this week, but I'm still not right back to normal. I don't just want to pass out as soon as 8 pm rolls around and I can stay awake for TV time with Justin better.

Physical Symptoms:
Slight, slight heartburn might be starting in the evenings.
Migraines are still a thing and I'm about to lose my mind over them. I can't stand them! I'm just so tired of having them all the time and nothing works to fix them! Had a couple really terrible ones this week.

Food:
Perhaps I've been slightly more hungry. Went to the grocery store this week and picked up a lot more produce than usual, trying to stay on the healthy track. Justin hates pretty much all vegetables, so it's really just for me and maybe Cal if he's feeling adventurous.
Back at the beginnings of the year I went through a phase where I was trying to reduce our meat intake and up our veggies, so I'm trying that again.

Favorite Moments of the Week:
Date day/night with Justin. Even though we didn't get to do everything we wanted and it actually turned out somewhat uneventful, it was still surprisingly nice to spend with day just with Justin and not having to worry about Calvin. He spent the day with Grandma. Then I slept in until 8:45 am Sunday! Holy crap. I literally don't think I've done that since Justin and I got married. It was actually nice because, unlike every other time I've left my baby, I didn't really miss him or feel guilty, I was able to enjoy the day without all that extra burden in the back of my mind.

Anything I Miss:
Sometimes I look back on my first pregnancy and laugh because it was so easy peasy to be pregnant and not have to worry about a toddler. Ha. Pregnancy is exhausting and having a toddler is also equally exhausting. It really is hard work!

Random Thoughts:
Calvin's running out of big kid clothes. I just cleared out all his 18 mos and under stuff and he now has a very minimalist wardrobe lol. With the change of the season upon us (mother nature still can't decide if it should be 90 or 60 out), I wanted to go through his stuff and see what cool weather clothing he may need. So we bought him a couple pairs of soft jeans. He has a bunch of traditional, stiff jeans, but to me if I was a little dude, I'd rather have stretchy jeans, so that's what we got him.