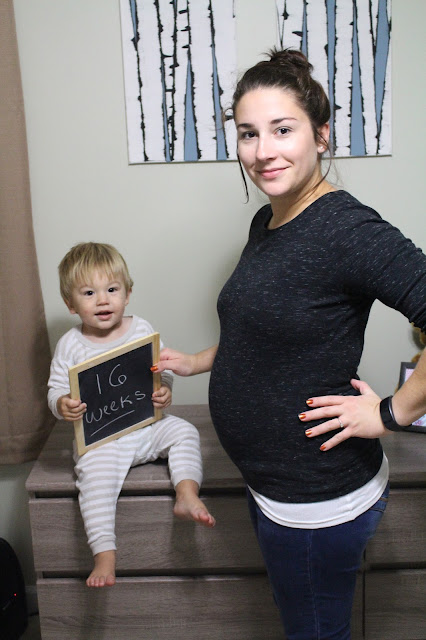 Bump:
I need to start applying more lotion. I've been kind of slacking on that this time around. I pretty much doused myself in lotion every single day from the moment I found out I was pregnant with Calvin. Not that it helped... I still got one million stretch marks lol. On the last day of this week, I felt baby moving a ton first thing in the morning and realized just how much stronger the movements get each and every week!


Energy:
Some days I feel like my energy levels are getting back to normal, then I'll have a day when all I want to do is nap and I question whether this is simply part of the exhaustion of parenthood and it's here to stay forever!

Physical Symptoms:
Haven't had morning sickness in a couple weeks.
Spoke with a nurse at the Maternal Fetal Medicine office about my migraines and she pretty much told me there was nothing I could take to help them, even though I told her Tylenol does jack. So that's super. I guess here's hoping they go away magically (like they did with Calvin at like 10 weeks)! I've been working on staying more hydrated, almost doubling my water intake. Yes, I am peeing all the time even more! But so far... it seems to be helping my head.
Little bit of heartburn.
Nose is still stuffy/runny/doing weird stuff.
Hairline zits feel like they're increasing again.
Maybe I'm getting a couple cold sores this week.
After going for walks, my wedding ring is feeling pretty tight.
The cats have been so clingy lately! I loved it when I was pregnant with Calvin, but I am not a fan this time around, I don't know why.
I keep forgetting to mention this, but it's been like a month now, ever since Calvin gave up nursing, I don't know if that's just a coincidence or what... but my nipples have been super sensitive. I remember they were sensitive in the very early weeks with Calvin, but totally not this far along. And I feel like they're way more sensitive than they were when I was pregnant with Calvin.

Food:
Having moments where I really don't want what's on the menu for dinner, not feeling hungry but knowing I have to eat or else I'll snack too much before bed, etc.
Egg-less cookie dough. All you have to do is replace your eggs with milk. Makes cookies just as good. In our recipe, I end up adding about 4 tablespoons of milk.

Sleep & Dreams:
A couple more nights of restless sleep, kept waking up a lot, but at least I could go back to sleep quickly.

Favorite Moments of the Week:
Seeing baby brother on ultrasound when I totally wasn't expecting to have one at that appointment. He was moving around like crazy! He's so little, yet so much bigger than the last time we saw him.
Also getting to spend another date night with Justin. We went mini golfing, out to dinner with my sister, then on a ghost tour in old town St. Charles, Mo.

Random Thoughts:
It finally is starting to feel right calling new baby by his name.

Doctor Appointments:
It looks like we're going to be spending a lot of time at the doctor this pregnancy. They are recommending I take progesterone shots every week and have ultrasounds every other week to check cervical length.

The doctor who delivered Calvin never mentioned anything about having to have these doses in future pregnancies, my current doctor said it was unlikely I would need to, then I go to this specialist and he highly recommends it even though he said it only gave about a 20% reduction in chance of preterm labor.

I know it's all for the best to help reduce the risk of PROM happening again. And visiting the doctor every week is way better than spending 5 weeks in the hospital again, but it still just sucks. I just want a normal pregnancy.

I feel like I just hit a brick wall in this pregnancy. Everything was going great and all seemed well and even though I know this is all just-in-case stuff and it's really not a big deal, it all just seemed super sucky at the time and I cried the whole drive home. I guess it all just boiled down to me feeling like I'm not even supposed to carry babies if shit is always going to go wrong, plus we want more kids, is it really worth it if we have to do this every time, plus I've always heard about insurance problems with this medicine so what kind of battles are we going to have to fight over this?

Sorry to leave on a somewhat negative note, but this week was just kind of sucky.
Love,
Alaina & Baby #2
Posted by lainamarie91 at 7:51 AM