I think now's the time when everything is going to really start flying by! The second half of this pregnancy runs through the holidays and I can already feel time going by so fast. 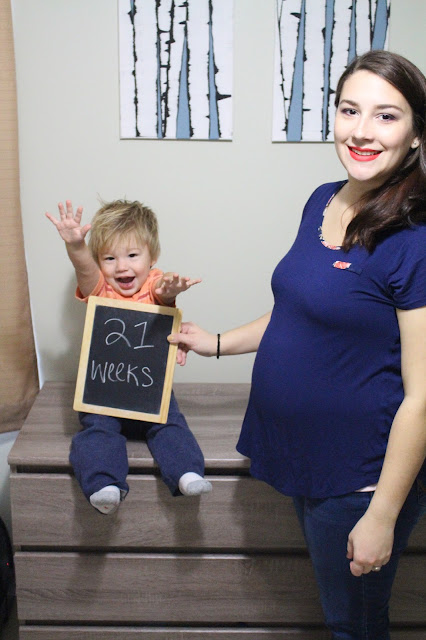 Bump:
It's getting itchy! I've started applying more lotion and oils. No stretchmarks yet, but I think they are on their way with all this itching!


Energy:
Tired again. But perhaps it's the restless sleep lately.

Physical Symptoms:
One bad migraine that lasted overnight into the next day. Those are the worst. Usually sleep is the best cure for a bad one, so when you wake up the next morning and it's still there, it super sucks. But it was the first headache I'd gotten in several weeks, I'm pretty sure, so I guess you could say that it's not so bad.
Light headedness seems to be making a comeback. It's very light, but it's definitely popping up.
I also think the relaxin hormone is starting to kick in. My hips have felt more achy and loose here lately.

Food:
Counting calories and behaving myself is still going well. I feel like I'm either having less cravings, or not letting them overtake me so much lately. I still have snacks, but I'm not being ridiculous about it and watching my serving sizes.

Sleep & Dreams:
I've been sleeping somewhat crappy. A couple nights this week, I just couldn't get comfortable.
Had a scary dream that involved my smart watch being some kind of bug or something. It kept making scary sounds and it was somehow making the lights in the house unable to come on. I had Calvin with me and he was carrying a hammer so I decided to use his hammer to smash the watch, then everything was better. Haha.
Also dreamt about getting a shot from a nurse who seemed like she had no clue what she was doing haha.

Favorite Moments of the Week:
Justin felt baby from the outside for the first time. He doesn't have a lot of patience for that, so he was lucky Eren happened to kick just a few seconds after he put his hand there.
My mom mentioned Eren by name. She made a hoodie and was saying Eren could wear it this time next year. It was weird to hear someone else saying his name, but very exciting too. :)
Caught Eren moving on video this week!

I want to meet this baby so bad! I do not remember feeling like this with Calvin, I think I was too nervous to experience life with a newborn. This time I cannot wait to hold my little baby and see what he looks like! I know we're only halfway there, but the last couple weeks I just can't shake this desire to see him!
Justin and I were discussing the newborn days before bed one night. I feel like the newborn days weren't that bad. The nights are sucky, waking up all the time, but really it's not that bad because they nap all the time during the day. I was telling him crazy toddler Calvin is more work than newborn Calvin was. I hope I'm remembering correctly! Haha. In reality, I think they each have their own unique challenges.

Love,
Alaina & Baby Brother Eren
Posted by lainamarie91 at 8:54 AM