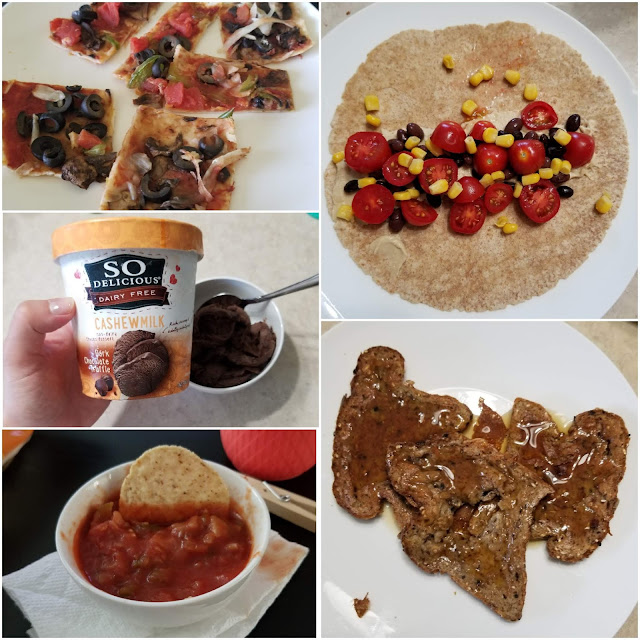 Breakfast:
French toast
I think I'll be trying another recipe next time. My bread is dense and hearty, so it turned out okay, but my husband's white bread totally fell apart.

Lunch:
Leftover veg pizza from the day before.

Snack:
(not pictured)
We went to a family birthday party and luckily Justin's sister in law is vegan. I had some vegan crescent pizza rolls and they inspired me to check out vegan cheeses. Also had some fruit.

Snacks:
Chips and salsa
Cashewmilk ice cream and it was totally delicious!

Right now I will say I'm going vegetarian but I hope to transition into a vegan diet. I don't want to waste the food we already have at home, so the plan for now is to find vegan alternatives for anything we need to get from the grocery store, but we're not just going to toss everything that isn't vegan that we already own.

My husband doesn't seem too thrilled. I told him I would still cook meat for him, but we're revamping our dinner ideas list so that I can hopefully cook meat just once a week and he can use leftovers with his meals. Once we start getting the hang of dinners, I'll definitely be posting some meal planning and tips here and on my YouTube channel LainasLife.

I don't really feel different. I don't feel like I have more energy or anything like that. I feel good, but nothing crazy.

I lost one pound, but I'm also 11 weeks postpartum and breastfeeding, so it could be attributed to many things.

It feels like a diet I could totally do. I'm not depriving myself of sweets, I'm just learning new recipes to get that sweet tooth fix.

Not everything is off-limits. I definitely learned there are a lot of surprising vegan things out there.

After doing a little research, I'm not worried about vitamin deficiencies. That's something that I always wondered about before looking into the vegan lifestyle.

I felt really good about the contents of my grocery cart when I went to the store. haha.

I wonder about the effect on my breastfed baby Eren. I wonder if he has a sensitivity to dairy. He's been a somewhat fussy baby and I've contemplated taking dairy out of my diet to see if it helps. It's going to take awhile to know for sure since the grandmas are giving him pumped milk from a few weeks ago when they have him, but perhaps in a month or so we might notice a difference in his attitude. It's a tough thing to judge though, because babies can just grow out of the fussy stage too.

I feel like the vegan diet is a modern day diet, almost like it's just the natural progression of things. Due to globalization, food is so widely available from all over the world and can be transported just about anywhere.

Also, why are vegan options so pricey?! I know it has a lot to do with government subsidies for the meat and dairy industry and that just makes me feel sad honestly. Even on the drive home from the grocery store, my husband made a comment about how much pricier it is to eat healthy.

I've been asked to take a look at my WHY? Why do I want to be vegan? I understand that I need a WHY in order to stay motivated, but I'm not sure I have one particular reason. Health, environment, the animals? I just don't know yet. I think to myself, if I couldn't kill a chicken to feed myself, why should I eat it because someone else killed it for me? I think about the fact that so much of the world's crops are grown just to feed animals for us to kill to eat, when we could just eat the crops... and that literally just sounds so stupid to me. And all of the damage the entire meat industry does to our planet is crazy when you consider all of the steps along the way from growing crops and transportation and concentrated animal pollution too. I have a lot of thoughts floating around my head, but I don't think there's one in particular that stands out for me right now. I'm sure that will change as time goes on.

I stopped drinking cow milk about a year ago for a couple months. It's when I was breastfeeding my first son and it made me sad to think of these cow mothers forced to be milked everyday. I hated pumping myself. I felt a sort of sympathy for them. But I didn't cut out cheese or yogurt or whatever else. I didn't think that deeply about it. Then over this weekend I saw a video of a mother cow walking across a field and her udders were so full she could hardly walk and I felt her pain. I know how much it sucks to have your boobies so full they could pop or to have mastitis or clogged ducts and I felt sad for her. And I don't want to contribute to that. "You are voting with your dollar," Ellen Fisher says a lot and this was always popping into my head this week. Yes, vegan food can be pricier, but isn't it worth it?

I don't think I can watch Earthlings. I keep seeing people recommend it but I've seen the trailer and I really, really don't think I could watch it. I know I should. I know it will motivate me 1000x more, but I'm not ready for that yet. For now I'm going to try my best to head for a vegan diet and hopefully I can be a good example to those around me, particularly my husband and my boys.

Thanks for reading. I love you guys.
Love,
Alaina