Some Thoughts on Breastfeeding 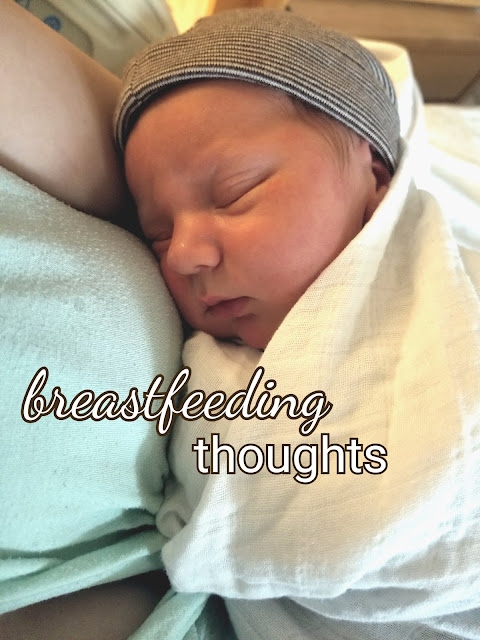 Breastfeeding is hard! I might even go as far as to say that nursing my second baby boy has been harder than my first. That was unexpected. I thought we might have some challenges, but I knew we could get through them. I felt confident that we could survive anything since I had struggled with my first son, Calvin.

With my first, we used a nipple shield for the first seven weeks. He could not, or would not, latch for more than a couple gulps. Although I hated that stupid shield because we were both dependent on it for those seven weeks, I also have so much love for that shield. Without it, I'm unsure we would have been successful at breastfeeding.

Eren, my second, has had a crappy latch from the start. He just wasn't very good at it in the beginning, and he still has moments where he doesn't get it quite right and we have to start over. I asked the pediatrician about tongue or lip ties when he was a newborn and she did not see any issues. My nipples hurt. I mean really, really hurt. I'm pretty sure I told my husband that breastfeeding hurt way worse than any moment of the c-section recovery. It sucked. I truly wonder if I would have continued trying if Eren had been my first son. But because I had been through it with Calvin, my oldest, I was determined to breastfeed again. I knew we would come out on the other side and be so grateful for continuing. We were only able to continue because I knew there was a light at the end of the tunnel.

It does get better! Your poor little nipples will heal eventually. And once you get through that, it is easy peasy smooth sailing, let me tell you! Breastfeeding now at 5 months old is a breeze. I feel sorry for mommas who have to wash bottles day and night. I just whip out the boob and we're good to go. A lot of women say the first couple weeks are the worst. For me, it was the whole first month with my second, then another month of less than great, and only then did it start to be easy!

Even thought it's hard, breastfeeding is perhaps my favorite thing about new parenthood. It's amazing to be able to calm your baby with the boobies. Binkies were made to replace boobies, not the other way around!

With all that being said, I understand why women stop. Even my husband has made those comments, seeing me struggle in pain and overwhelming frustration. I cried a lot with both of my boys. But my husband never once said, "hey, let's just do formula." And he would have gotten an earful if he had! I wanted to breastfeed. I wanted it so much. After the traumatic birth of my first son, I felt I had failed as a mother already (after spending over a month in the hospital with pPROM, then being induced and having pushed for two hours and ending up in a c-section anyway) and if I was not going to be able to nurse that baby, that would have felt like complete and utter failure as a mom in just the first few days of his little life! The lactation consultant and nurses in the hospital were not as helpful as they could have been with my first. But I thank God, literally, for the nurse at our pediatrician's office who told me that using a nipple shield would be okay. I thank God for that nipple shield!

My experience with the lactation consultant with my second son was soo much better than my first! I truly felt like she wanted me to succeed. She didn't just assume I knew what I was doing because I had nursed my first for 15 months. I think everyone deserves to meet with someone like her.

So I guess I write this to say, "keep trying!" Breastfeeding started out crappy with both of my boys, but we have had great nursing relationships! Don't quit on a bad day. Every little drop really does count!

Email ThisBlogThis!Share to TwitterShare to FacebookShare to Pinterest
Labels: breastfeeding