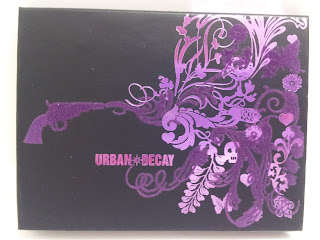 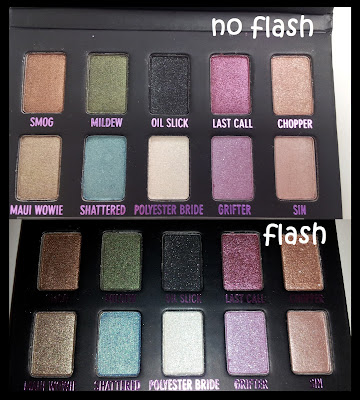 I don't really know what to say about this palette.  I bought it when it was on sale for $15, which sounded like a good deal.  But dude, these shadows make me angry.  They are super pigmented and beautiful, but the glitter fallout drives me nuts!  They don't have bad color fallout, like when put on the black shadow, I didn't get black speckles all over my cheeks, but I had glitter particles everywhere from pretty much every single shadow.  My face looked like a disco ball.  I even had glitters on my forehead and whatnot, how did they get there?! 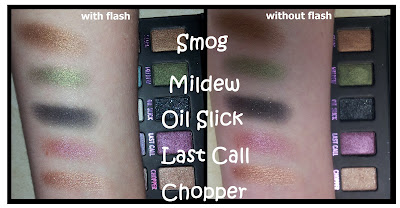 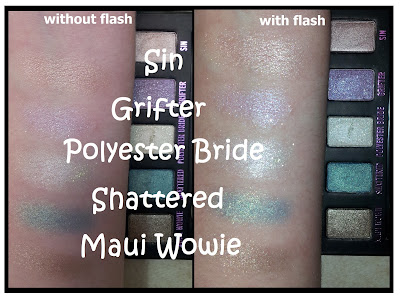 The colors are gorgeous.  The bottom row has some really wonderful springy, pastel colors and they're all so nice, it just makes me angry that there is so much glitter fallout.  I would have been super pissed if I paid full price for this thing.  So I have resorted to doing my eyes first, then practically cleaning my face again to remove as much glitter as possible, then completing my face makeup.

Overall, I feel kind of angry, but I don't really want to make it sound like this palette totally sucks, I was just very disappointed.  I have my Coastal Scents 252 Palette and I don't think any of those shadows have been this big of pain in the butt, and as we all know, Coastal Scents is much more affordable than Urban Decay.  It was like using loose pigment or loose glitter, that's how crazy the glitter fallout was.
The shadows are soft and silky smooth, they glide on gorgeously and are very pigmented.
I have the single shadow in Sin, which I received in an Ipsy Glam Bag and I love that shadow and never had any big fallout issues with it, not even with fallout, so I figured Urban Decay was good stuff.  I guess the upside to buying this palette is that I now have an extra Sin eyeshadow. *shrug*
I'm not impressed, but that's just my opinion.  Hope this helped.
Below you'll find some attempts by me at finding "dupes" for these Urban Decay Colors in my Coastal Scents 252 palette. 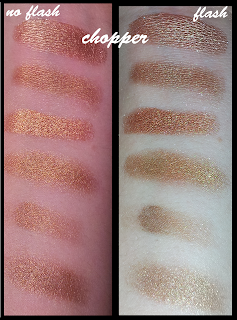 To me, Chopper is just like any other goldy shadow.  Although it does have a smoother feel and seems to have a nicer undertone and more dimension, I still think the overall effect of Chopper would come across with pretty much any gold shadow.

The Coastal Scents color is less pigmented, but they are both pretty similar.  Maui Wowie has more of a sheen and therefore more dimension, but the color and undertones are pretty darn close. 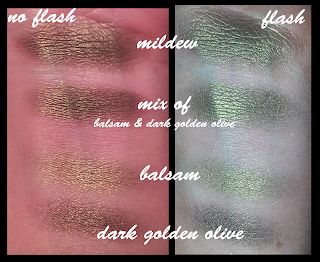 To make Mildew I did have to mix two shadows.  It's a pretty green/brown with a cool sheen, but I really don't find it unique enough that I would buy this palette for it.

Overall Shattered isn't particularly a great color in my opinion.  I love blue shadows and I just don't see this one as anything special or wonderful.  It has more of a sheen with a slight teal tone whereas the Coastal Scents color seems just straight blue and has less of a sheen. 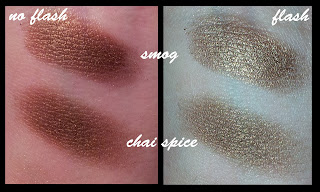 This particular Coastal Scents color that I matched to Chai Spice I believe is right on except for the bolder sheen Chair Spice has.

I just absolutely cannot get over the glitter fallout in this palette.  I don't understand why anyone would pay full price for this.  I got mine for $15 and still feel like that was hardly worth it.  I sure hope the "new" formula of shadows is significantly better than this because I can't see why anyone would like Urban Decay after my dealings with this palette.