You may have seen my review on the Urban Decay Ammo Shadow Box and you would have seen how extremely disappointed I was with those shadows. (check out that review here)  I could not believe anyone would pay this kind of money for a product like that.  Well thank goodness I also purchased this palette as well because I was much more pleased with this than I was with the Ammo Shadow Box.  I purchased both of these products on sale for $15 on the Urban Decay website a couple weeks back because they were a super deal and I have never owned any palettes from Urban Decay. On the Urban Decay website, this one was listed as a "new product," so I figured maybe it was made with the newer shadow formula and the Ammo Shadow Box was just a leftover from the old formula.  I also looked at a few of the shadow ingredients in this palette compared to the Ammo Shadow Box and the single shadows, and judging by the couple of shadow ingredient labels I saw, it looks like this palette has the same new formula for the single shadows.  I have heard in other reviews that the "new" formula is much better in terms of crazy fallout and whatnot, so I guess I can only assume this palette is full of the "new" shadows because the fallout is nothing compared to that crazy Ammo Shadow Box! 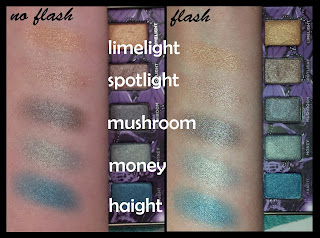 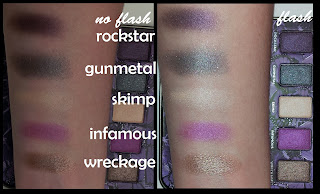 Although there is still some fallout, it is not anything like the crazy glitter fallout mess of the Ammo Shadow Box.  Thank goodness.  I do love a few of these shades and I think if you really really wanted to travel with only one palette, this one could work.
Limelight is a pretty gold color, not particularly amazing.
Spotlight I think isn't too great.  It comes off sheer and not quite like the color you see in the pan.
Mushroom is a wonderful taupe.
Money is alright, like a green-toned grey.
Haight is a very pretty blue, but I have better blues.  I am a blue/teal/turquoise shadow lover.
Rockstar is a super pretty dark purple.
Gunmetal is another wonderful color, dark enough for outer-v or crease work, but not so dark and scary as a black.
Skimp is another pretty one.  It's a light color but it's not sheer, it comes off well.  It can work as a brow bone color if need be because it isn't super shimmery or glittery.
Infamous looks beautiful but it can take some work to get the full color pay off, but when used lightly it's also very pretty to bring some subtle color to an eye look.
Wreckage I wasn't super impressed with because it can take some work to get it as dark as it looks in the pan.  It feels like a darker version of Spotlight which I don't really like to begin with.


Here are some "dupes" I found in my Coastal Scents 252 Palette.  I didn't look in any of my smaller palettes or single shadows.

Haight has a darker tone to it, you can tell it has like a grey undertone, whereas the Coastal Scents color seems to be just straight up blue.  Haight has more dimension. 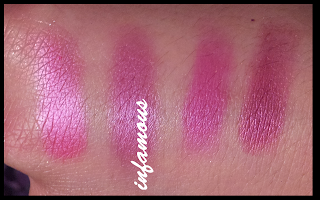 I did not find an exact dupe for Infamous because it has a more blue/purple undertone than typical pinks.  Although I feel that these other pinks in the Coastal Scents palette would do just fine to accomplish the same affect in an eye look, I guess technically, they aren't exactly "dupes."

Limelight has more of a sheen and more glitter than the Coastal Scents color, but I think they are the same color underneath it all.

I hope this helped and you enjoyed!
Thanks for reading!
Love,
Lainamarie91