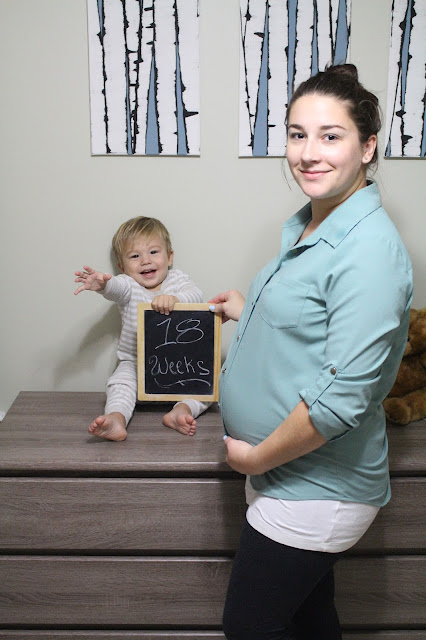 Doctor:
Ultrasound to check cervix. 3.2 cm. Doc says if it gets down to 2.5, it's worrisome, so we're doing well so far.
Also got to see baby is indeed a boy.
She measured the heartbeat twice. It was from 150-160 bpm.
He has lots of room in there because he started out and ended the ultrasound in two different positions from sideways to head down. I didn't realize just how much room they have at this point.
Got my first Makena shot. I hate needles, drawing blood, shots, etc. but they give it in the butt so at least I wasn't watching haha. The shot wasn't bad, it just takes a little while to inject because it's a thick liquid. Afterwards for a couple hours it did ache a bit though. 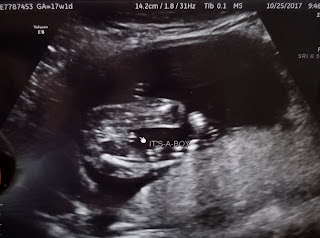 Bump:
Pretty sure I am feeling him from the outside now! I laid in bed with my hands on my belly for a good 20 minutes Sunday night while he was moving like crazy and I felt it a couple times. :) So exciting!!! Definitely feeling him everyday, several times.
Justin put his hand on my belly the other day and said he felt him, jokingly lol.


Energy:
I got to be home all day with Calvin Friday. We went to the grocery store and to the doctor to get Cal's flu shot. When we got home I made him lunch before nap time and I literally thought to myself, holy crap, your energy is back! It just all of a sudden occurred to me, I felt like I was back into my normal mom groove and it was awesome. I should have been exhausted after running errands with Mr. Cal, but all was great.

Physical Symptoms:
Increased perspiration. I don't know what that's about. I did have this issue postpartum with Cal, but I don't remember it at all whiile I was actually pregnant.
Don't want to jinx it, but it seems like the headaches are finally calming down in the last couple weeks, right as I was about to have a breakdown if they wouldn't ease up.

Food:
Still too much snacking. I've had a bad sweet tooth. We need to keep the flour and sugar locked away so I can't just make cookies whenever I feel like it. Ha. I have been craving some damned Oreos though.

Favorite Moments of the Week:
Finally feeling our little boy from the outside! :)

In case you missed it, his name is Eren Michael. 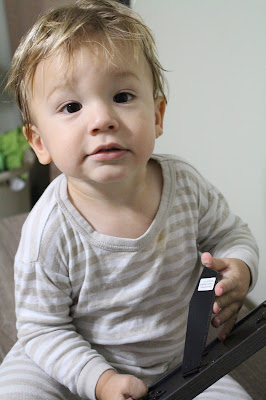