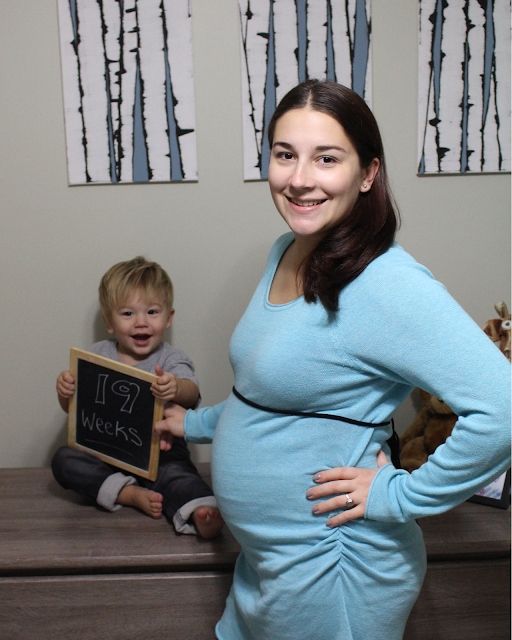 Bump:
+15 pounds.
Belly is already getting to be in the way. It's harder to get off our low couch and I'm much more aware of the belly this week. I feel like it literally doubled in size practically overnight. Lol.
Eren is moving around like crazy everyday.
I'm already feeling him kick above my belly button which I am not too happy about. I feel like it's a sign that my uterus is measuring big again, meaning I have a lot of fluid, which is the same thing that happened with Calvin and makes me worry things are going to go the same way this time around. :( I hope it's not all directly related, but it still makes me worry.
Braxton Hicks contractions are starting. I can feel them during/after walking or moving around a lot.

Physical Symptoms:
Backache. And we're not even halfway there. :(
Seeing the chubbiness already. Engagement ring is getting pretty tight, so I switched it out for another ring. I'm on the verge of loosening my watch band too. Too early for that crap!
Peeing all the time! I feel like Eren gained 3 pounds overnight and I have to pee at all times now.
Some cramping this week.
Feeling some pressure down there this week. Some things I read say it's normal for subsequent pregnancies, but others say it's worrisome when you have cervix issues (which we're hoping isn't the case). So I plan to bring it up at my next doctor appointment.

Food:
I've been snacking like crazy these past couple weeks, but I have also realized that I am getting hungry quicker too. The super pregnancy hunger seems to be finally arriving this week. I feel like I do need more food, but I need to focus on healthier choices.

Sleep & Dreams:
Another dream about feeling baby's spine through my belly. So weird.
Also dreamt my sister was pregnant but she wouldn't admit it. Her belly kept growing but she would deny that she was pregnant.

Favorite Moments of the Week:
I had a doctor appointment to get my Makena shot where they were explaining to Justin and demonstrating for him so that he can administer my remaining shots at home. On the way home Justin said he admired how much women had to go through to have babies and I thought that was pretty sweet. However, I found it funny that it took seeing me getting stabbed in the butt with a second pregnancy for him to make such a statement. You know, going through 20 hours of labor and then being cut open to have baby #1 pulled out, then being attached at the boob to this baby for the next six months didn't cut it, but getting a shot in the butt for baby #2 did! Ha.

On a less positive note, I have been feeling so worried and overwhelmed lately. I realize we are very fortunate in our journey, there are many others who have struggled so much more in their journeys to become parents. However, I have to be honest and just say that all of the stuff we're doing to help prevent something bad from happening is overwhelming. I don't feel comforted that we're doing all we can, instead I feel overwhelmed like every little possible thing that could go wrong is now on the table. I took the first 32 weeks of my pregnancy with Calvin for granted. When everything seemed as if it were normal. I want a normal pregnancy. I don't want to worry like this. I want to be excited for stronger kicks and seeing my belly move and not worry what would happen if my water broke before 24 weeks. And even so, what are the real chances once we hit 24 weeks? I am more aware of what could go wrong this time around and it's very intimidating and worrying.
I used to worry about something being wrong with the baby. Some genetic issue that could cause miscarriage or something like that. It never occurred to me that my own body could reject a perfectly fine baby. My water could break, I could go into labor too early. I never imagined those possibilities until I met with the MFM doctors and had all of the bad shit laid out right in front of me.
My baby is a person. He has a name. I've envisioned what he looks like. He is real. He's not a blob. If something happened to him, I don't know what I would do. And those kinds of thoughts never really crossed my mind with Calvin.