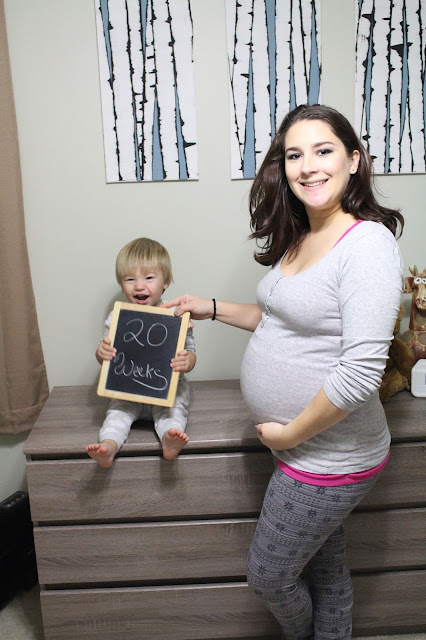 Bump:
My uterus is measuring ahead, it's like way above my belly button, which is where they say it should be at this point. And I can sure tell. I can't believe we're only halfway there and this belly is taking over!
Pretty sure I started feeling hiccups for the first time this week. It's just way too rhythmic for it to simply be kicks or other movements.

Doctor Appointment:
At MFM, I had my ultrasound and the doctor told me things were looking "better than great." My cervix was measuring 4 cm, which he said was awesome. I'm super happy about that. I even brought Cal to the appointment and it was a good 45 min. ordeal and he was super well behaved until the last two minutes when he was just totally fed up haha. I was so proud of him! :)
At my regular doctor we saw that baby is measuring about a week ahead and my uterus is measuring 22 cm at 19 weeks, 2 days. Baby Eren weighs 12 oz, they say. I know I'm technically measuring ahead, but I'm actually pretty happy with it. They say within 2 cm of your number of weeks is normal. So if baby's measuring a week ahead at 20 weeks, 2 days, and my uterus is at 22 cm, I'm going to technically call it normal. :)
Justin gave me his first injection of Makena and it actually went really well. We didn't like freak out about it for five minutes beforehand. I did put an ice cube on the spot before to help numb it a little but he totally shot me above the spot lol so that was pointless.


Energy:
Got my flu shot at my doctor appointment and I was feeling pretty sluggish afterwards.

Physical Symptoms:
Finally starting to retire some bras. They're getting too tight and driving me crazy but it's kind of a stupid situation too. I don't want to spend money on non-nursing bras since we'll be nursing soon enough, yet I want to be able to enjoy these few months of non-nursing bras. I just can't decide what to do. Why does the idea of wearing nursing bras when I'm not nursing bother me? Not like anyone else is going to notice...

Food:
Behaving myself better and tracking my calories. It seems to be paying off so far. I'm actually really proud of myself over this week.

Sleep & Dreams:
Dreamt Justin shaved Calvin's head. Man, was I pissed!
Dreamt about Calvin and Eren. Eren was less than 6 months old and Calvin was a big boy and we were trying to take a family photo. It's all getting so real!

Favorite Moments of the Week:
Justin puts Calvin to bed 99% of the time and let me just say he's the best ever. This week he began a new bedtime ritual where they walk to the bottom of the steps like they're going to bed, but then Justin tells Calvin to go give mom a kiss. So he runs over to kiss me, then goes back to the steps like he's going to bed, and Justin tells him to give me a kiss and he runs back again, back and forth a few times. It's pretty hilarious. Calvin will hesitantly start climbing the stairs, because he knows Justin's going to tell him to come back. Haha.

I just can't wait to see my baby! I keep imagining what he'll look like. I imagine his hair color and eye color. If he's another baby clone of my husband or if I'll finally get a baby who even kind of looks like me. Haha.