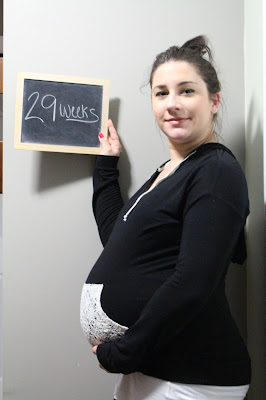 Glucose Test Results:
I just had to start off this post with this awesome news: my one hour gestational diabetes test was normal! Yay! I am just so happy about that. Since my uterus is measuring big and last week we discovered Calvin is measuring big too, plus the fact that I've gained like a million pounds this pregnancy so far, I thought for sure I'd be diabetic. So... I guess Calvin's just big for no good reason? Lol. We'll see what my doctor says about it all next week. Permission to treat myself to a bag of candy corn? I've been wanting candy corn all week...

Maternity Clothes:
I can't wait for the weather to get warm and stay warm so I can just live in dresses. Some days I just don't even wanna look at pants. Especially days I shower in the morning and I just put on a gallon of lotion. Pants are pretty much impossible at that point.
And, once again, bras are proving to be one of the suckiest things about maternity clothes. I have none that are comfortable, yet flattering. The ones I've been wearing are similar in style to sports bras and they feel awesome, but honestly they just make me feel and look frumpy overall, they just aren't going anything positive shaping or anything like that. But, on the other hand, should I really buy a new bra right now not knowing how long it's going to fit and work for my changing body? They say your rib cage can stretch out and you'll never be back to the same band size after pregnancy. But that's not the case for everyone. I know I've gained weight and plan to lose it, so that will also affect the band size. Plus not to mention what the cup size might do! I could be pretty much the same, bigger, smaller, whatever, by the time my milk comes in and sticks around. So who knows at this point... Hopefully though, next pregnancy I'll have a nice little collection of bra options.

Emotions:
Things are going good. I'm getting super excited to meet Calvin, even though I know it's still so far away.

Food:
Some days I still hate salad, but I can do one at least every other day, so at least it looks like I'm being healthy. Some days I can't decide if I should go home and bake some cookies or workout. Haha. I've been on a baking spree this week.

Sleep & Dreams:
Sleep's still going pretty good. Sometimes I feel like I wake up more often, but I haven't had any issues falling back asleep recently. Once again, I am super grateful for the awesome sleep that I'm getting! I know I'm still snoring and it's bugging Justin and I hope it goes away quickly once Calvin arrives.
Then this week the "thin skin" dreams began. I had a dream that I could seriously just feel Calvin's head up on my left hand side. It was really defined, like I could feel his eye sockets and such. Haha. Creepy dream. And another night I dreamt I could feel his little hand up on my right side, I could almost hold it, I could feel his fingers perfectly through my belly.

Energy:
When I get off work, I just want to nap. I feel like I'm back in the first trimester where napping is literally just all I want to do. But I know I should be making dinner or working out. That's a tough decision.

Exercise:
Did some legs and arms exercises over the weekend. Actually woke up Sunday morning to sore legs haha, that hasn't happened in awhile. Went for a half hour walk with Justin during the week and did a little bit of weights working out too. So I succeeded at the 3x per week this week! Yay! Gotta be honest, for two days after our walk my back was killing me. I can't say it's necessarily due to taking that walk, but it sucked. My back has been weird, it's usually only sucky every few days, and this was the first time it hurt for two days back to back.

Physical Symptoms:
Just an update on things, I've been taking a magnesium vitamin for a few weeks now. This, combined with a little ottoman under my desk at work to prop my legs up on have both really helped my restless legs and calf cramping. Of course, I asked my doctor before starting this extra vitamin, but I'd highly recommend looking into it for yourself if you're suffering with the same leg issues.
General discomfort. I just feel uncomfortable a lot. And I'm sure my sweet husband is tired of hearing it. Some nights I'll just crawl all over the living room trying to find a comfortable way to sit or lay haha. I'll sit on one end of the couch, lay, move to the other end, sit on the floor, lean on the couch, roll around with my yoga ball, then just sit there and say "I'm so uncomfortable" over and over again.
Back pain has been pretty crappy this week. :(
Round ligament pain sucks, I'm afraid to ever stretch my back because of those stupid ligaments (okay, I know they're not stupid, they're just doing their job here, but they hurt!).

Movement:
He's been avoiding my rib cage this week, which is nice. Thanks Cal.

Favorite Moments of the Week:
At work one day I hummed Seven Bridges Road by the Eagles when it came on the radio and I guess it woke my Calvin, I could feel him lightly squirming around in there. It made me excited to see what kind of music he'll like and if he'll be partial to my music choices instead of his daddy's lol since he's spent all this time with me and my music. :)

Baby Purchases:
No new purchases, I'm getting excited for the shower though. It feels so far away, but it's about a month from now, I know it will be here before we know it! :)

Random Thoughts:
Holy crap, we're getting there! Next week will be 30 weeks! That sounds like sooo many weeks! Haha. He'll be here in no time!
I've been on an organizing/cleaning/rearranging things kick this week in my makeup room, my personal space. It's the room where we keep the computer and my makeup and filming setup and all the good YouTubin' stuff. I just wanted to declutter some stuff in there. It's only a matter of time before I get the urge to do the rest of the house! Haha.
But hey, side-note, yet also somewhat related: I really want someone to clean my bathroom. It's pretty dirty and needs to be done. But getting on my knees to clean the bathtub at this point is just not appealing to me in my 36 cm pregnant belly. Man, that bathtub really needs to be done. Haha. I use this "measuring big" belly as an excuse for a lot of things. I consider myself just as uncomfortable as someone who is already 36 weeks pregnant. According to my doctor, this is pretty justifiable. Lol.

Thanks so much for reading!
Love,
Alaina and Little Calvin
Posted by lainamarie91 at 1:04 PM