Day one down.
Since it was Memorial Day we went to a family BBQ in the afternoon.

Now I did learn something from this first day having attended a family get-together where food was out. You're probably less likely to endlessly snack on random stuff if you know half of it isn't part of your diet. In that aspect, I can see how a diet like this would help you lose weight. It's harder to come by real, whole food snacks at an event like that, while all the processed stuff is readily available.

I ended up making my own dinner (not what I originally had planned) because my husband wasn't hungry after eating at the BBQ and I only had to feed myself. 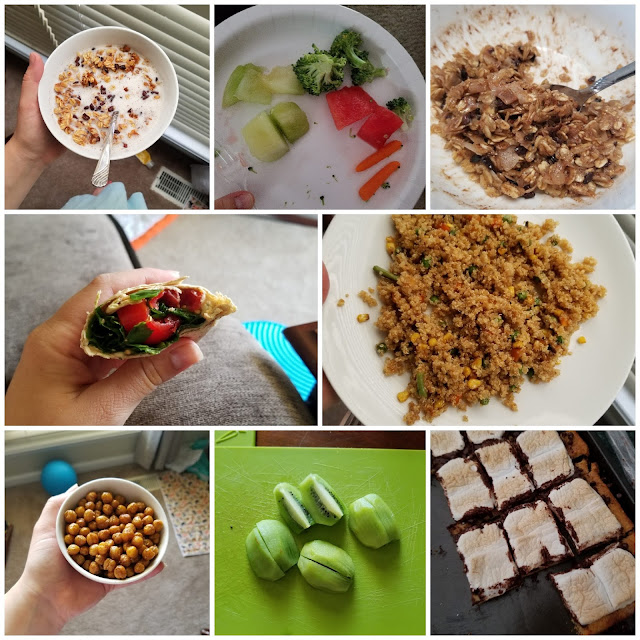 So this is what I ate:

Breakfast:
Oatmeal with coconut flakes (should have added them afterwards, they were squishy after microwaving, I like them crunchy), cacoa nibs, maple syrup, almond milk

Snacks:
2 kiwis & a can of roasted and seasoned chickpeas (recipe below)

Snacks:
Went to a BBQ and had carrots, broccoli, watermelon, honeydew, vegan s'mores (made by my sister in law, I don't have the recipe)

Roasted & Seasoned Chickpeas
1 can of chickpeas, drained and rinsed. Then sandwich them in a clean dish towel and roll them around gently to get as much moisture off as possible.
Toss them in 1/2 tablespoon of olive oil, season with salt, pepper, garlic powder, cayenne.
Bake at 400 for 35 min. I ate it all in one sitting, you could split it into two snacks, but the chickpeas lose some crunchiness if you don't eat them immediately.