The final week of the first trimester is finally upon us! Wow! I seriously can't believe how quickly this has flown by. 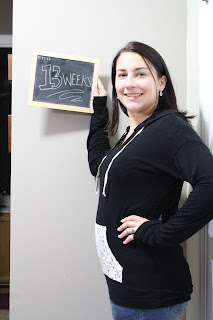 Bump:
My "12 Weeks" picture from last week (taken at 12 weeks, 1 day) was my favorite so far. I think I am starting to look pregnant, not fat, and that makes me happy. Even if it's only to my own eyes that I am "looking pregnant," out in public I bet nobody would know it, but at least I'm getting into it.

Weight:
135 (+7 pounds). I think I might discontinue this weekly update. I don't want to stress or focus so much on the pounds. I hope you understand. I am happy with a total of seven pounds gained in the first trimester though. I was afraid it would just keep on building, but it stayed steady toward the end. But from here on out, I think it's a different story, so we'll just leave it be. I might update you periodically, we'll see.

Morning Sickness and Food:
Happy to call the morning sickness officially over with the beginning of the second trimester just on the horizon. But the serious pregnancy hunger has totally set in now. I feel like I am hungry all day! Like all day! I don't remember feeling this way before, but two days into week 13, hunger just took over! Seriously. I could eat all day. I'm not even exaggerating, it's pretty crazy.

Exercise:
Went to the gym twice this week yay! I really need to get on it and stick to it but for two days in a row I was very proud of myself lol. :)

Maternity Clothes:
No new purchases, but I'm finally able to wear jeans on the weekend with the purchase of my awesome Walmart pants from a couple weeks back. Ha. Previously, I was wearing leggings pretty much all weekend. You could see examples of that on my Instagram before I announced. Ha.

Emotions:
I almost flipped out on Justin for eating something I wanted. Ha. That was a little intense. I wanted pop-tarts for breakfast and we were all out, I stormed out of the kitchen. Meanwhile Justin went to the store and got pop-tarts, as well as stopping by the local doughnut shop. I was being crazy, but he is just so sweet.
I saw a picture of a baby boy in a teddy bear jacket and started crying it was so cute. Cute things are like ridiculously cute to me these days. Just unimaginable cuteness everywhere.

Sleep:
I really really want to order a pregnancy pillow. If I'm this uncomfortable now, I just can't wait for the months to come. Ha. I am still sleeping well, but sometimes trying to fall asleep in a good position is a task. Before I got pregnant, I enjoyed falling asleep on my belly probably half of the time. So with this growing tummy, that position is no longer feasible. Trying to adjust to new sleeping positions is proving to be difficult, and even though I never used to fall asleep on my back before, I want to these days more and more. But I know that's not good for the baby as your uterus starts to grow, so I can't let myself get into the habit. So it looks like side sleeping is the goal here and it's kinda sucky trying to get into the groove right now.

Dreams:
Weird dreams continue. Pretty sure I had one that I was drinking again while pregnant. Then I had one I cheated on Justin under the impression that it wasn't a big deal because I was already pregnant. Ha! What the heck...

Energy:
So they say with the start of the second trimester, everybody gets their energy back and everything is hunky-dory. All I can say is that Wednesday night (12 weeks, 5 days), I stayed up til almost 10! That's amazing seeing as I usually HAVE to lay down right at 8.

Physical Symptoms:
Acne. All the pimples. Out of nowhere. What the heck.
And the scalp pimples are back too. Gah! I don't want to, but I might have to begin washing my hair everyday instead of every other day. Bye bye hair color. Lol.
I'm going to go out on a limb here and say my skin is even oilier than usual. It usually starts to be halfway decent in the winter months, with everything drying out and whatnot, but apparently this year, it hates me.
So even though my face is freaking out, my fingernails look great. Haha. They're growing so fast and they're thicker and tougher than usual too.
The numb feeling spot on my tummy feels a little more noticeable/prominent this week. I really wonder what that's about, should have asked the doctor when I went last week.
So much hunger! I feel like I'm starving all the time.

Favorite Moments of the Week:
Watching Justin fill in nail holes in the extra bedroom in preparation for turning it into baby's room. Then laying on the floor in the empty room talking about baby. And seeing Justin hold Yuna the cat and trying to explain to her that there will be a baby in this room soon enough. Haha. We might be crazy cat people... Ok, maybe I am, and Justin is just being influenced by me...

Nursery:
My lovely Justin cleared out the extra bedroom that is going to become the nursery, with the help of my sister's boyfriend. He even cleaned up the basement and organized some things, it's looking great! He even got a big roll of carpet from work and it covers almost half our basement and makes it look so much better! I know it's still so far away before baby needs its own room, but I'm so happy to be seeing this little progression. Next we just get to go pick up the crib and changing table from my older sister. :)

The Name Game:
We had one name picked out last week and I just couldn't handle not having another, so we finally got to figure out our other gender name pick! I love them both! And they actually have a funny commonality that you will all know in due time. Haha. I can't wait to know baby's sex so we can call him/her by name. And I can't wait to tell you guys about our name choices in a video and to reveal the sex to you too! I just can't wait to know!!!

Baby's Sex:
Late this week or early next week Justin will know the secret! He's good at keeping secrets, so I have full confidence in him and his ability to announce to everyone at the same time! (I got my blood drawn for the Harmony test on Dec. 3 and they'll call him with the results in 7-10 days).
But then I wonder. What if Justin feels left out because he has to hear it over the phone from someone he doesn't even know, as opposed to everybody else learning it together from family? That makes me sad. I wish we could learn together.
When sitting in the nursery to be, all I can imagine is a little baby boy's room. I just can't seem to picture a little girl. And when I think of the two baby names we picked out, I am so attracted to the boy name, I feel like that's who baby is. As soon as Justin suggested the name, I was just in love. It's so weird and unexplainable. I'm probably gonna freak out if baby ends up being a girl because I have felt so sure baby is a boy. Lol. We'll just have to wait and see.
I even got my first glimpse at any kind of sex judgement from Justin this week. He referred to baby as a girl one time! He refuses to say what he thinks the baby is, so getting one little reference is my only hope from him lol. He also had a dream in the beginning of a little girl, so I think Justin's bet is on girl even though he refuses to make the choice! Lol.
We will of course both be so happy no matter what sex the baby is. As long as it is good and healthy, we will be the happiest parents ever. I can't believe we are this close to finding out already!!!

Announcing The Sex:
I am over the moon excited for the gender reveal party. Justin could magically find out late this week, but it's more likely that it will be next week. If he finds out this week, we're definitely gonna have the party a week early! I just want to know and having to wait two weekends is sooo hard! I can't wait to have our close family over to learn what the baby is too! :) I think it's going to be so fun to see who guesses right! I plan to have everyone who picks boy/girl stand together for a group picture and everyone to pick a side, stamp a heart in the color blue/pink and sign a little decorative paper to be framed in baby's room. We bought pink/blue candies and plates and forks. Justin's in charge of making the cake. He's the only one who will know beforehand. I'm not sure exactly what method he's going to use to reveal, but he keeps talking about the cake. He's worried about making the icing. We went grocery shopping over the weekend and he was just going to buy colored store bought icing. I laughed at him, that's not how we do cake in this family. Ha.
Anyway, we plan on recording the gathering in segments, but hopefully will get to keep the camera rolling when we cut the cake and we can capture everyone's reactions on film! So that will be up on YouTube for you guys to see too if you're interested. :)

Reality:
I didn't know what else to name this section, but early in this week I just kept getting these waves of strange feelings. Every once in awhile it's like I'll totally forget about being pregnant, then when I realize I've forgotten, I get all worried and ashamed that I forgot about my own little baby in my tummy! I know this just sounds silly, but it's just a weird little phase I'm having. The fact that we're going to know baby's sex so soon is really starting to make me feel like this is real. I know I've said that before, seeing baby on the ultrasound, hearing baby's heartbeat, etc. But once we know who baby is and can give it a name, I think that will really blow us out of the water in terms of the reality check.
Sometimes I worry that it hasn't really hit Justin yet. I feel like he might be stressing more than I am about it all. This week though, after clearing out the future nursery, I feel more connected to him on the baby level. I feel he talks about baby more and it's starting to finally hit him.
I really do wonder about all dads out there. It has to be a strange thing to just watch us grow and then one day you get a tiny person! They don't feel the symptoms or feel the baby moving all day, yet it's just as much their baby as it is ours. It grows out of two teeny tiny little cells and one day you get to hold it. It's all so miraculous. I just wonder if it's even more bizarre for the dads out there.

Love,
Alaina and Tiny Baby
Posted by lainamarie91 at 4:14 PM