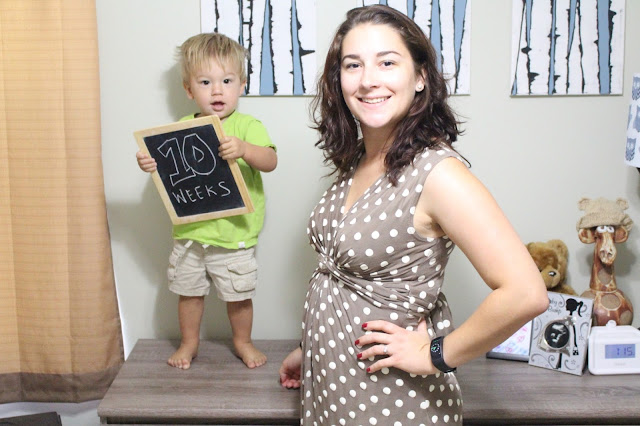 Bump:
+3 pounds overall
I have vowed to start wearing maternity pants next week. I even wore some a couple days this week because my regular pants were already bugging the crap out of me like fifteen minutes into the morning lol. The rubber-band method works for the first half of the day, but after lunch, my jeans drive me crazy!

Energy:
I'm not sure if it's hormonal changes and things are actually looking up, or if I've just been good about going to sleep earlier and that helps the whole day run more smoothly, but it seems like the fatigue is down a bit.
However, Calvin got sick this weekend and was up a lot in the night. Chasing after a boogery little sick boy is hard work haha.

Attitude:
I may or may not have been more snotty than usual this week. I'm gonna blame it on not feeling well and taking care of the sick toddler.

Physical Symptoms:
Morning sickness has really dissipated.
Still getting headaches.
Some nipple sensitivity this week. Overall though, I don't think the boobies have changed much at all so far. Not sure if already still breastfeeding Calvin has anything to do with it.

Favorite Moments of the Week:

Gender reveal time! We filled a hollowed-out egg with colored chalk dust and had Calvin throw it in the driveway. Making and testing the eggs with Justin was fun too. We made one of each color and I got to be the one to find out the sex this time (even though maybe I let it slip before the reveal gathering). Let's just say this family can't keep a secret ha.

Random Thoughts:
I know we took the Sneak Peek test and there can be inaccuracies, especially with a boy result, so I'm not totally sure if it's really sinking in that it's a boy, almost like I don't trust the results.

So my little buddy Calvin has been weaning himself lately and I don't know how much longer he's going to want to continue. He's usually nursing every other night before bed now. He's been sick, so it's hard to nurse with a stuffy nose when you are already indecisive about nursing lol. But I've actually finally come to terms with it. I think I'm ready to let go. If you had asked me about this a month ago, I would have panicked and said I wasn't ready, but I think we've both come to a good place where we are both ready if it's time to wean completely. I'm not sure that it's really pregnancy related or not, but it's a big step in our family I thought I'd document here.