This is definitely "our" breastfeeding story, not "my" breastfeeding story. It's a relationship and a process my son and I have both gone through together. We had a combination of baby- and mommy-led weaning, but when it came down to the very end, Calvin chose when it was time to stop, albeit, earlier than this momma was expecting. 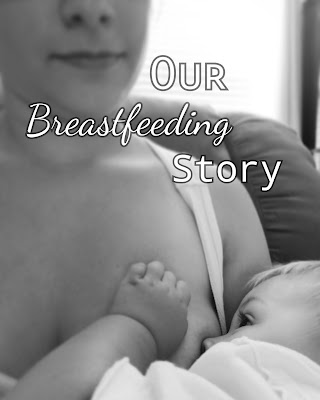 In the beginning, breastfeeding was hard. Calvin couldn't latch. He never latched in the hospital, I pumped, and when he was in the NICU, they even gave him formula. He only finally latched with the help of a nipple shield right in the pediatrician's office at our first out of the hospital visit. And let me tell you, that moment brought tears to my eyes! After days of struggling with him he finally was drinking straight from the tap!

We didn't take advantage of that magical first hour after birth. Calvin was going to be spending 24 hours in the NICU, after one hour with us, and my family had already waited for like four hours to see him. So I decided to forgo that hour alone with just the three of us, and let our family members come in to meet him. I do regret that decision.

So the nipple shield proved to be another obstacle altogether. It was almost two months before we weaned from it. The nipple shield and I had a very love/hate relationship haha. Without it, I'm unsure we would have ever made it in our breastfeeding journey, but weaning from it was a bitch. Calvin became dependent on it, even when I just knew he didn't really need it, he preferred it. And honestly, I was somewhat dependent on it too. It was easier to just let him use it than to struggle with him for several minutes without it. But I hated relying on the thing. The whole point of breastfeeding was to be able to do it anywhere at any time, but always having to remember that nipple shield was making a natural, convenient process, totally inconvenient. We had an emergency nipple shield in the diaper bag, one upstairs in our bedroom, and one downstairs in the living room.

I don't want to focus too much on all our mistakes here. I've got a whole post about that here! Haha. I just want to put it out there that we didn't start out all sunshine and daisies.

Now excuse my #mombrain and #pregnancybrain here about exact dates, but I'm pretty sure we nursed on demand until Calvin was around nine months old. That's when I made the decision to start changing our schedule around a bit. I'm not sure if it's a coincidence or if it was bound to happen naturally, but over the next few months, the nursing sessions just started dropping off like flies!

Around Calvin's birthday, we started trying for baby #2. I really really didn't want to have to wean completely in order to get pregnant. That was a big fear of mine. I wasn't ready to wean. That first and second month of trying we were down to two nursing sessions (morning and bedtime) but when we didn't get pregnant in those two months, I started to question whether breastfeeding was the cause, so we dropped our morning nursing session. So we held onto that one last session each day for about two months before one night Calvin just decided he didn't want the boobies anymore. And what a shame, he had just learned to say booby! Haha. He says it real fancy-like, "boo-bay."

About a week or two before he was totally finished, he refused to nurse on my left side. That side always produced less, so I thought maybe it just finally dried up.

About a week after he stopped taking the left side, he started nursing every other night or every three nights. I describe it like a cat's instincts haha. If a cat sees a laser or a jingly ball, they just have to attack it, they can't help themselves, it's just their instinct to do it! When Calvin saw the booby, he initially leaned in to drink, but as soon as his lips touched my nipple he was like "nope, I don't want that." We tried both sides, we tried laying side by side, nursing off the side of the couch, laying on my belly, cradle hold. We tried getting him calmed down to almost bedtime proportions, but he still just didn't want it. So he went to bed without it. He only nursed to sleep about half the time anyway at this point, so he was fine to go to bed just rocking with my husband. Justin always takes him up to bed, he's awesome like that. :) I think he has more patience than me. Haha.

Then he caught a cold. He was already nursing every couple days at this point, and once his nose stuffed up and he couldn't hardly breath while nursing, we were done for. He skipped a couple nights as he was first getting sick, and then we got one magical night where he was actually able to breath before bed and we nursed. Our very last nursing session ever. And it was just great and I'm so glad I was able to cherish that last time and remember it and know in my heart that it was probably going to be the last one.

We were in his room getting ready for bed. He was covered in natural vapo-rub, we had a humidifier running, and an essential oil diffuser, trying to make sure he'd sleep through the night with his poor little cold. We sat on the floor leaned up against his dresser and nursed for the last time.

If it had been just a few weeks earlier and I would have had a breakdown, I think. I just wasn't prepared. I felt like I needed it more than him. I worried about having to stop due to sensitive nipples in early pregnancy, but we never had that problem. We were blessed to make it this far and I know it's earlier than I would have liked to let him go, but I am so grateful that he got to make the decision and I'm so glad he did it on his own.

Thanks for reading.
Love,
Alaina