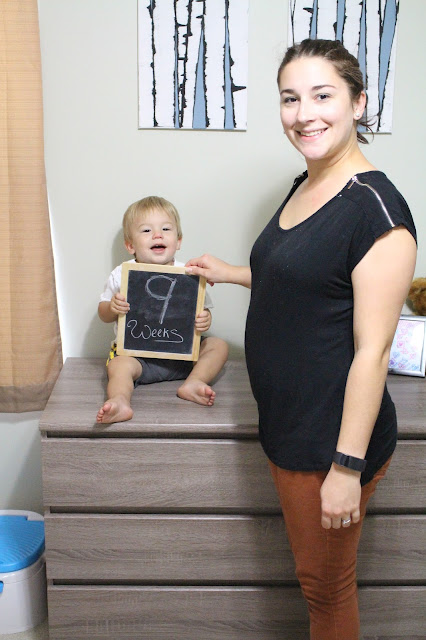 Bump:
Still using the rubber band method on my pants. Starting to feel like I look extra fat in the belly.

Energy:
Even with 10 hours of sleep, I just want to keep sleeping. Then other days I'm up at 5 and can't go back to sleep.
Overall, I do think the daytime fatigue has settled down. I no longer want to pass out in the middle of my workday (as often), but when 7:30 pm rolls around, I want to crawl right into bed. Haha.

Physical Symptoms:
Don't want to jinx myself or anything but it seemed like the nausea was down this week. I read somewhere (and wish I could find the link) where a woman said she was taking prenatals with iron and her doctor said that the iron could be contributing to her nausea in early pregnancy. I was taking prenatals with iron too so I decided to switch to another vitamin without the extra iron and within the week, my nausea has been much better. It could be a coincidence, but maybe not!
My fingernails are starting to look good. :) That was one very nice benefit I remember from last time haha.
Increased uterine twitches this week, but still no bad cramping.
Increased headaches again. Man, I hope they phase out soon.
With the decreased fatigue and nausea this week, I've been feeling a little better, but then every once in awhile I'll get that stupid worrisome feeling about my symptoms suddenly diminishing and thinking it means something bad.

Food:
I've been getting picky this week. Justin and I plan out like a whole month of dinners and I've just been throwing those plans out the window lately when that evening's particular meal doesn't appeal to me. Also had more cravings. I almost made Justin run out to get some Sour Patch Watermelons but I texted my sister (who lives down the street) and she had some!
However, I've been surprisingly good about snacking this week. Since the morning sickness seems to have been giving me a break this week, I haven't felt the need to keep my stomach full all the time, I can survive without snacking every two hours, so that's been awesome!

Sleep & Dreams:
One scary dream. I hate scary dreams.
Had a dream I was at Best Buy and some dude was flirting with me and I kept trying to tell him I was married, had a kid, and another kid on the way. When I left the building my sister was waiting for me in the parking lot in this super old, rusty, junky looking dump truck that was parked on top of a hill. She was in the passenger seat so I had to drive and I thought the truck was going to roll over as we tried to pull off the hill it was parked on. Ha!

Favorite Moments of the Week:

Getting to spend the day with my Calvin on Wednesday again. Over the summer I've been working all five days and I really miss having Wednesdays off with Calvin. He had a doctors appointment and I took the whole day off. We went with my mom out to lunch and by the park and had a really great day. Not going to lie, I was totally exhausted by the end of it though.

I really need to talk to my boss about getting Wednesdays off again... Working just those two days at a time really helps me keep my sanity. I think it's a perfect balance of work and home time and it should be the standard! It helps me get housework done so I'm not stressed by how terrible the house looks all week long, as well as giving me time with my little buddy, and time to rest from my workplace.

What I Miss:
Having energy! I literally can't wait for the second trimester!

Thoughts on the Sex of Baby:
I officially get to take the Sneak Peek gender test at the end of this week!!! The next time you hear from me will probably be with a gender reveal! I know reviews on this are very mixed, but we're taking it anyway! Haha. The way we see it, if it says girl, it's like super duper likely it's a girl. If it says boy, we'll be a little more skeptical. It seems to be more likely to get a false boy reading because of possible male dna contamination. We'll see!

Up until this point, I have been pretty set on baby being a boy. Until I started rethinking the boy name we have picked out. I just feel more connected to the girl name and it makes me think baby is a girl. It was the same with Calvin. I just loved his name right off the bat and as soon as Justin suggested it, I just knew in my heart that's who was living in my belly. I know these are silly things to be basing my judgement on, but we'll hopefully know next week the results of the Sneak Peek test.