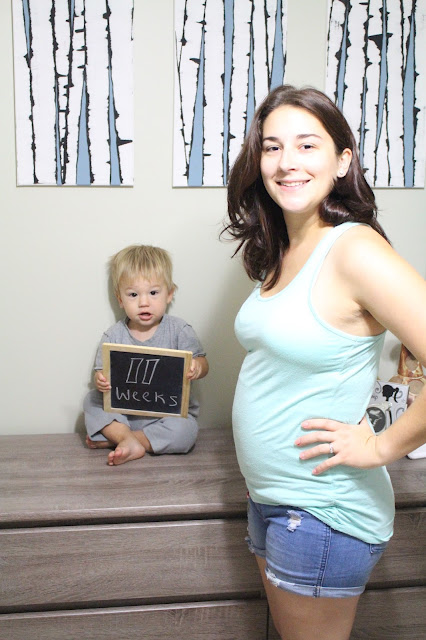 Bump:
+1 more pound for a total of +4
I've been feeling some uterine movements, like vibrations. Like fluttering or a shiver. Almost like there's a hummingbird in there haha! I don't remember a feeling like that with Calvin. I'd say it's happened about 3/7 days this week. I know I'm going to get people saying I'm crazy, but I swear it's the baby! I didn't start feeling Calvin until 15 weeks and I had an anterior placenta with him, which they say can make early feeling of movement more difficult.

Energy:
Each day is different. Some days I feel totally normal, and other days I could absolutely pass out at my desk in the middle of the work day.
I seriously wish I didn't have to work. When I'm at home with Cal I just nap when he naps and it's seriously a life saver. But you can't nap in the middle of the day at work.

Emotions:
I've definitely been more emotional lately. I've had a couple little cry spells mostly over working mom guilt. I feel so bad to even feel that way though because I don't even give a thought to how Justin feels. Some mornings I just feel so bad when I go get Calvin to get ready in the mornings and I'll just sit with him in his room and get all teary-eyed just thinking about having to leave for work. I know he's in great hands, he is with his grandmas while I'm at work and it's great that they are able to spend time with him, but it is still really hard lately for some reason. I just get to feeling so selfish for even thinking that way, yet at the same time, it can be good to just cry it out a little.

Physical Symptoms:
A couple days with a couple waves of morning sickness.
Thought I was doing pretty well in the headaches department, but I had one big one over the weekend.
A couple nights of lower backache, just a little reminder of how bad it's going to get in the future weeks to come lol.
Some more low c-section spot aching late in the week, almost like it's really sensitive to the touch around my pubic bone itself.

Food:
Craved some pizza after seeing a commercial on TV. So we ordered some even though we already had dinner.
Craved a buffalo chicken salad at work one day even though I had already packed a lunch. Had to go to 54th Street to get one. So yummy! I've been really digging buffalo sauce lately.
Bought some candy corn because it's delicious and awesome all year long, not just at Halloween. Typically I'm all over that stuff but I can only eat a handful at a time these days, instead of demolishing half a bag haha what the heck?
A couple days where I felt sick after eating, even with smaller portions.

Sleep & Dreams:
Sleeping kind of crappy this week, but I've had a cold. I just get restless and hot and uncomfortable. I wonder if it's already time to pull out the Snoogle.
Had another dream a friend of mine was pregnant. And I told her in the dream that I just had a dream that she was pregnant.
Okay, Justin is not a big cuddler. He always likes to have his own space in the bed. But this week he actually rolled over to cuddle me in the middle of the night and I pushed him away because I was hot and uncomfortable. Haha. The one night he actually wants to cuddle me and I'm like no way.
Had a pretty intense dream about rotting and losing my teeth. I really hate those dreams, but I don't know why. Maybe I have a real fear of having tooth problems.

Favorite Moments of the Week:
Calvin and I both weren't feeling well on Monday so I stayed home from work with him. That whole morning he was very lethargic and he actually laid around with me and cuddled with me in the living room, so even though we felt crappy it was nice to actually have him cuddling with me. This kid literally never ever sits still for more than three seconds unless he's absolutely dead tired. Lol.

Things I Miss:
Not feeling fat, not craving all the things. We've been spending way too much money on eating out lately because when I want something, I want it now! Haha. And why does food prepared by someone else taste yummier than stuff you have to make yourself? Ha.

Random Thoughts:
Are we really this close to the end of the first trimester?! Holy crap!