As you may have noticed, life has been hectic around here. I haven't posted since we came home with Mr. Calvin almost three months ago! Although I have been decent with updates on my vlog channel, I sure have neglected the blog.

Being a new mom is so exciting and fun, yet truly exhausting. I love seeing Calvin grow and learn. About a week and a half ago, he even rolled over from front to back for the first time! Over this weekend he's been really starting to coo to us and copy us. I can stick my tongue out at him and I can see him trying his hardest to do it back, it's so sweet and amazing. It really is just stunning that this little person is already learning to do so much!

Yet at the same time, it breaks my heart to keep having to pack away his little outfits that he keeps growing out of. Over this past weekend I threw a bunch of his 0-3 month stuff into a storage box because it's all getting so tight. We had to buy some 3-6 month sleepers because his little legs could hardly stretch out in his 0-3 month ones. He's growing so big and fast. When we take his 3 month picture in just a few days next to his teddy bear, he's going to be almost the same size as the bear! When I look back at his 1 week picture next to that bear, it's so unbelievable how much he's grown!


There are rough days, don't get me wrong. He's even started this new thing where he doesn't actually want to eat every two hours on the dot, so if he's freaking out and I put him to breast, sometimes he just screams into my boob. That's frustrating. Breastfeeding used to be the cure all, but it's starting to not work all the time these days. He has his growth spurts and holy crap, those days can feel endless, like the growth spurt will never cease. He'll eat almost every hour during the day and wake every two hours at night and that's so exhausting, especially since I've returned to work.

But seriously, no matter how many crappy days we have, just seeing his precious little smile (which he's doing all the time these days!) totally makes it all worth it. He is such a sweet and happy boy.

Now even though nursing is not always the solution these days, he does always seem to want to nurse as soon as I get home from work, even if he just had a bottle at Grandma's an hour ago. So I take that as a compliment, like he missed the milk straight from the tap all day and needs his fix after a day of bottles. And I know it must be more of a comfort with mom thing than actual hunger. It's also a really nice way to just calm down after a day of work too, instead of heading straight into starting dinner or tidying up, I can just sit back and chill with the baby boy. 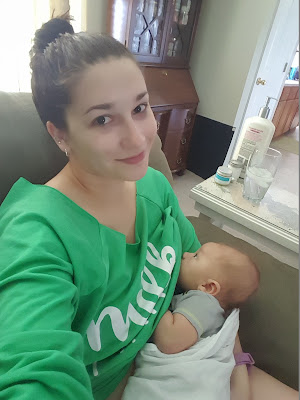 Of course everyone has an opinion about who he looks like, but in my eyes he really is the perfect little combination of myself and Justin. I'm pretty sure he's going to have brown eyes like me. For awhile there would be days they looked really dark, then the next they started to look a little lighter, but lately they're pretty dark and I think they'll stay that way. (I read somewhere that once they get real dark, it's very unlikely they'll end up being light). His hair, on the other hand seemed to be lightening up. Justin was a blond baby and grew up to have dark hair, I've always had dark hair, so we'll just have to see. It is growing in thicker though, even if it's ever so slight. I love the hair on the very back of his head, it's super thick and long and so pretty!

Over the weekend, we had some family over to play Cards Against Humanity. Justin was sitting on the opposite end of the table from me so I could stare right at him (like a creeper, I know). But just some of his facial expressions and things that he does really made me realize that Cal makes the same little faces, it was pretty sweet. :)

I don't want to jinx it, but 4 of the last 8 nights, he's only awoken once! (I call nighttime from 9 pm-5 am because that's what I'm sleeping on work nights) He'll eat sometime between 7-8 pm, then sleep all the way until 2-3 am! I had been reading that a three month old should start to only wake once per night, but up until this last week, I was not seeing any signs of that. He will still have nights where he's up every couple hours, but we "always" get a nice long stretch right off the bat, on his usual nights he'll wait till 11 or 12 before he wakes for the first time.

As for me postpartum, some things have been changing. Finally the weight loss is starting to pick back up again (It felt like after the first month, my weight was very stagnant). I'm officially 20 pounds from my pre-pregnancy weight (which both sounds so close and so far away at the same time lol). I can't decide if my goal is to be at 127 or 130, but right now I'm 147 (I was 127 the day I found out I was pregnant, according to my home scale, but 130 at my first doctor appointment. 130 just sounds like a nice round number and a reasonable goal though compared with the awkward odd number 127 lol). As long as I can fit into most of my regular clothes again, I'll be happy (I accept that perhaps my hips have widened a bit and that area might not be perfectly back to normal)). One thing that totally surprised me is when I put my measurements into a BMI calculator, I'm considered overweight! That does not help my self image, I'll tell you what! I have to get down to 141/142 to be in the normal range. To me, that's crazy! I didn't think I looked that bad! And by those standards, I totally understand when they say this ridiculous amount of Americans are considered overweight. And for awhile there wearing size 10 did not help me feel good either. Being a size 4 last summer and a size 10 this summer sucks!

My pants are getting loose, but I have no belts that fit and I refuse to buy a new one haha. I'm in a size 10 right now, when I get to size 6, I'll be happy. (I was size 4-6 before I got pregnant). My size 8 pants fit but squish my belly and make it look not ideal, but I don't think I'm too far away from being able to wear them, that's why I refuse to buy a belt, in hopes that I can fit in those size 8s soon enough. Some days I wake up and feel really good about my body, I'm happy with it, knowing it took 9 months to get this big, the fat won't just disappear overnight. Then there are other mornings I wake up and literally hate my body. It's hard because I've never struggled with weight until now. I've never intentionally been on a diet of any kind, I never tried to avoid treats or snacks until I was pregnant. And I know the entire time I was pregnant I felt like I was starving all the time and I totally did eat more than necessary, I was very bad. However, struggling with this weight afterwards I believe will be a huge help to motivate myself to eat better next time around, so I don't spend months postpartum hating my body. And there are days I say, is it even worth it? If we plan on trying to get pregnant again next spring or summer, what's the point in trying to look good now just to be fat and pregnant in less than a year?! It's my own little struggle right now. But if I can lose one pound per week (a very reasonable goal or so I hear) then I'll be back to normal my Christmas, and that's an encouraged statement to me.

Also the stretch marks are finally starting to fade. I don't hate the ones on my belly, they don't really bother me, but because of the ridiculous amount of weight I gained, I have them all over my thighs and hips and those are the ones that drive me nuts! It seems the ones further down my thighs and on my breasts are fading the fastest. I apply lotion everyday. It may not have helped prevent them, but I do think it's helping fade them.

Overall, things are awesome. I love being a mom. And I'll love it even more when I get closer to my normal sexy self! Haha. Then at least I'll have more than three pairs of pants I can wear!