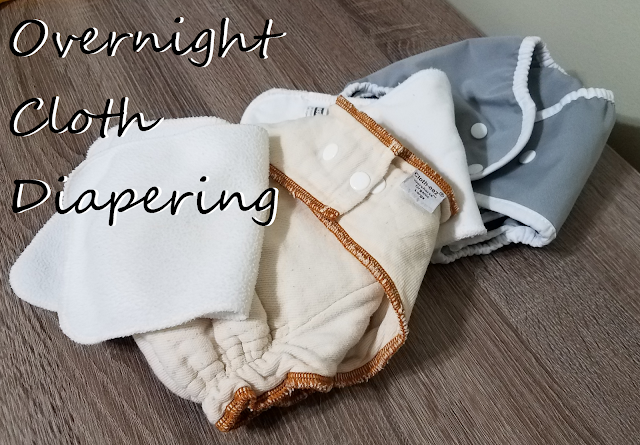 I was so afraid to cloth diaper overnight. We've only been cloth diapering Calvin since he was 9 months old, so we went two months without even attempting to try it overnight. This was the first combination we tried and it worked for us. We've been very lucky and haven't had to troubleshoot nighttime at all so far. Fingers crossed!

This is what works overnight for 10-13 hours for us, starting closest to the skin out to the cover: 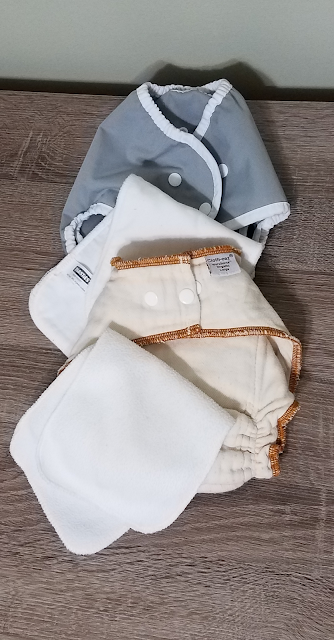 I watched a lot of YouTube videos about nighttime cloth diapering before making the attempt. A fitted diaper and hemp insert seemed to be a pretty popular combination. I threw the stay dry liner on top just in case it would make him feel more comfortable and it actually makes cleaning up his first thing in the morning poo way easier. I have no idea what brand the stay dry liner is because we got them in some hand me down clothing bags.

We already owned some Thirsties hemp inserts and I had wanted to try out some GMD workhorse diapers anyway, thinking about building a newborn stash for future babies, so I purchased a couple medium and large GMD workhorse fitteds just for overnights. For a fitted diaper, they're reasonably priced, natural and organic. Calvin can fit in the mediums, but they come kind of low on his backside, so we prefer the large at this point, he is around 23 pounds. 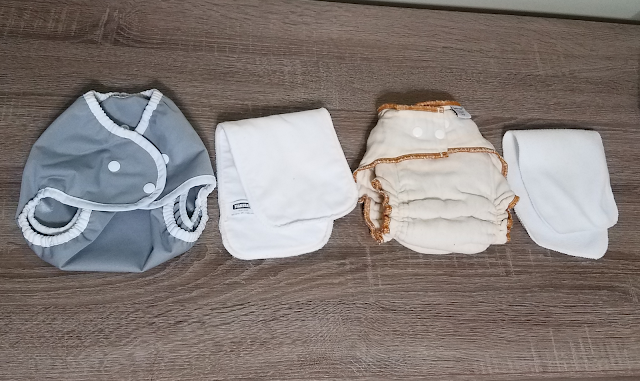 And that's what works! I hope it does for you too. Let me know what your overnight diaper looks like!

You have just started on this awesome new adventure in cloth diapering. You are so stoked. Cute prints, saving the environment, saving cash! So fun! Then you finally muster up the courage to leave the house without disposables. You venture out to the grocery store with baby and as soon as you take him out of the car seat, you feel a little wet spot on your hand. What?! Later you put him down for a nap and he wakes up soaked! What is happening?! You get frustrated. But hopefully you don't give up! Instead you head to the internet! Someone must have an answer!

We've been cloth diapering for 10 weeks now, but let me tell you, we've learned a lot in this short amount of time. We started when Calvin was around 9 months old, so next time around with a newborn could bring its own learning curve. Here are the tips I have learned to keep the diapers from leaking.

Here are my top 3 tips for preventing leaks!
(we use Buttons covers with Best Bottom inserts or prefolds and Thirsties Duo Wrap covers for reference)

1. Make sure the leg gussets are in the crease of the thigh and crotch.
If it's too far down the leg, you're going to get leaks when they move. We had several leaks in the legs in our early days and I blamed the cover. Come to find out the cover was fine, it was the placement in the legs that was causing problems.

2. Make sure the absorbent part is fully tucked into the waterproof part.
Even if the cover's leg gussets are sitting right on top of the insert, you can get wicking. Make sure they're inside, not just on top. Also check the top of the diaper, below the belly button. We used to get leaks there at naptime because Cal sleeps on his stomach. I've learned that both having the diaper cover too tight or too loose can cause this issue, so make sure you have the best fit you can get.

3. Change the diaper every two hours.
I was expecting too much out of cloth in the beginning. They just aren't going to hold as much pee as a disposable. The only time I have had leaks (since figuring out what the hell I was doing) are when the diaper is simply full beyond capacity, when you change the baby and the insert is totally completely saturated. It has nowhere else to go! You can't expect the cover to just hold in a pool of pee.

It's that simple. I like to take Cal's legs and move them in and out to see how the diaper shifts around. I open up his legs and check to see if anything is peaking out. Usually something does need to be adjusted, so that extra check really is helpful! And it's not that much different than a disposable. I always check to make sure the fluffy edges are flared out on the legs and butt of a disposable.

Right now Calvin wears disposables during the week while he's at the grandmas' and cloth all weekend when he's with us. We still have a giant box of disposable diapers, but when they run out (or Cal outgrows them), we're going to discuss using cloth with the grandmas too and see what they think. They both already know that we cloth diaper him at home, I'm just unsure how they'll feel about doing it themselves.

As of right now, we also want to cloth diaper our next baby from the start (and all the babies after that), so the grandmas will probably have to try it out eventually. :)

I hope this was helpful! Let me know any other tips you have to prevent leaks!

Love,
Alaina
Posted by lainamarie91 at 11:05 AM No comments: