I did not do the flats and handwashing challenge this year, but I really want to one day! I could tell you my excuses, but that's unnecessary haha.

Instead I thought I'd just talk about flats today.

Since seeing so many others doing the challenge this year and following their journeys, I was also inspired to give flats a go. I'm so glad I did. Flats are actually pretty cool and I wanted to tell you guys why.

If you've never tried flats before, I highly recommend giving them a go. If you've tried them before and didn't end up being a fan, maybe give them another shot! They are pretty awesome.

Thanks for reading!
Love,
Alaina
Posted by lainamarie91 at 3:48 PM No comments:

5 Ways I've Changed as a Mother : One Year In

My little guy just turned one on May 27. Besides looking back on this year and not being able to comprehend how he's grown so fast, I also have realized it's an opportunity for me to look back on my first year of motherhood.

I have changed since becoming a mom.

That's not something I thought I'd be proud of. I didn't think I would like to admit that, but I have. Having Calvin has changed me in so many ways that I never really took into consideration beforehand, ways that never even occurred to me.

And don't get me wrong it's not like I woke up on May 28, 2016 and I was a completely different person. It has been a very gradual process sinking into motherhood and feeling comfortable in it. And I must admit it's only been in the last couple months that I've really come to understand my new self. 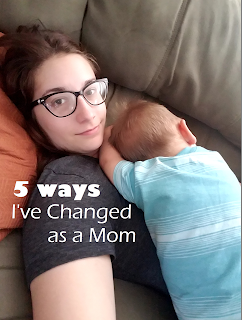 I am so much stronger than I ever knew.
Emotionally, being a mom is hard. It was a roller coaster for the first couple months with all the hormones and adjusting to this crazy new life, but it's been better since then. However motherhood is totally unlike anything I've ever experienced. I thought college was hard. I thought my job was stressful at times. But nothing compares to motherhood. Being a mother is a full time job. Seriously. Even if you aren't a stay at home mom. Life is hectic and there is hardly ever time to just sit on your butt and do nothing anymore.

I could care less what others think.
In the early months breastfeeding in public was super terrifying, but I've since gotten over it. And it's not just breastfeeding. I don't care if Calvin decides to scream in the middle of the grocery store. I don't care if he cries while we're out to dinner. Of course, I try to comfort him, I don't want him throwing a fit, I just don't feel embarrassed over it and I don't worry that everyone is watching us. Which is totally strange for me, I've always been a very shy person.

Being a calm mother is hard!
I have lost my cool on too many occasions in this short year. Being a calm and loving mother is hard work. Reminding myself not to freak out on my little boy is a constant battle. I want to be able to speak to Calvin and tell him what's gone wrong instead of just telling him to stop. I don't want to be the mom who yells all the time and it's harder than I thought it would be to fight against that urge. I didn't expect to have to remind myself so often that he's just a baby, he's new at this, he's learning, just like I'm learning how to be a mom.

My body is not the same and it's okay.
I've gone back and forth on this one for this past year. I gained a ton of weight with Calvin (over 50 lbs, and I'm only 5'3"). My body is definitely not the same. I am still fluctuating between 5-10 pounds left to lose. My belly is super squishy. I have stretch marks like pretty much everywhere. My legs are more jiggly than before. But you know what? It's okay. Calvin doesn't care, why should I?

My priorities have changed.
Especially financially. I would rather spend $50 in new clothes for Cal than to buy a new eyeshadow palette for myself. I don't feel the desire to collect all the new lipsticks from one line. I don't feel like rushing around to all the local Walgreens to find the newest summer collection. That just doesn't appeal to me anymore. And I never would have thought that'd be the case! If you asked me 13 months ago, I never ever would have thought I'd just drop one of my biggest passions like that. I know having a baby is expensive, but I can honestly say having Calvin has saved us money in a different way because we think twice about our spending now. We used to just get whatever we wanted, but now we consider what's best for the family as a whole, and that keeps us from just buying every little thing that isn't necessary. Thinking about the three of us as a true family unit instead of just me and Justin has really changed things.

I'm sure not everyone changes so much as a mom, but I've definitely noticed changes in myself and I can say with a lot of confidence that these changes have been for the best. I love being a mom, even though it is seriously a lot of work, I'm so happy.

What We Packed for Our One Year Old on a Weekend Trip : Cloth Diapering

For Calvin's birthday weekend (Memorial Day Weekend) we took a little trip to my Grandpa's in the country and I thought I'd show you what we packed in Calvin's bag. We left Saturday morning and returned Sunday afternoon. It was a two hour drive there and two hours back. 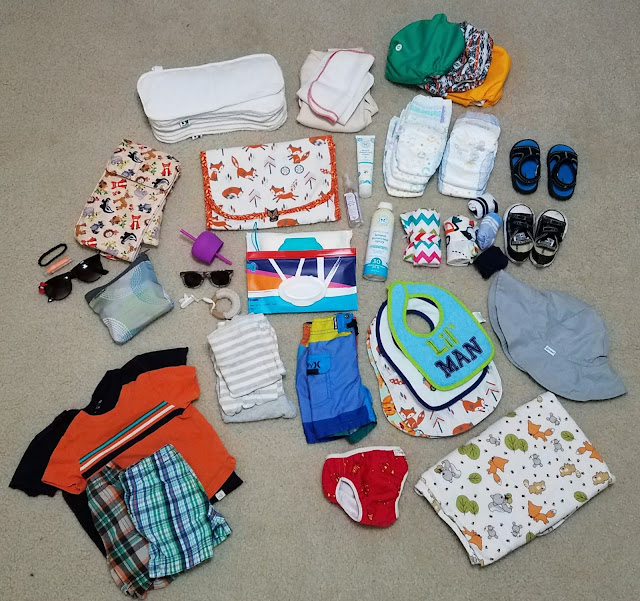 From top to bottom, left to right, in rows (kind of):
We anticipated hot weather and swimming in the creek, but it rained pretty much as soon as we got there and it was cooler and muddy for the rest of the weekend, so we ended up not using a lot of what we packed, honestly.

But the backpack was definitely stuffed full. 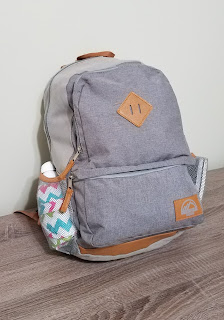 I brought disposables just in case. My husband was weary of cloth diapering away from home, but I actually found cloth diapering on this trip even easier than disposables. In my opinion, I think it's more courteous to dispose of used disposable diapers out in the main trash when you're at someone else's home. You don't want to throw a dirty diaper into the kitchen trash can and let it stink up someone else's house. So using cloth was easy because I didn't have to walk outside every time I changed a diaper. The cloth diapers just went straight into the wet bag that was already near me and the diaper bag.

Yes, you could do the same with disposables and just wait until you got home to throw them out. However, we were down there with another couple and they use disposables and I just always noticed momma walking outside with the dirty diapers and I said to myself, hey this is actually a good example for how cloth can be easier than disposables. :) We did use one overnight disposable on the trip simply because the backpack was already so stuffed full, I didn't want to stuff it too full with an overnight diaper or two.

I never realized just how dangerous of a place my Grandpa's is! Haha. Having to watch over a little person and make sure he doesn't kill himself in a place that is definitely not baby-proofed is a really tiring job. You couldn't just let him out of your sight for a minute! It was a lot of work to keep an eye on him but it was still a relaxing weekend.

This weekend honestly helped me to relax as a mother. We were down in the country, it was muddy and rainy, Calvin played in the puddles pretty much the entire weekend. And I let him. I didn't try to keep him clean. I didn't really try to prevent him from eating the mud. It helped me realize he's just a kid, we've all eaten dirt, we've all survived being down there at Grandpa's. My sisters and I have all been going down their our whole lives. I truly feel that the weekend was beneficial to us as a family in so many ways.