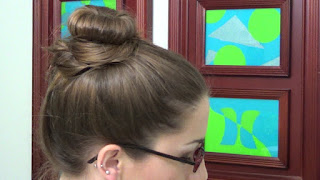 With the heat of summer just around the corner, it's always nice to know how to get your hair up to keep you cool and also cute at the same time.  Here are three easy and quick ways I like to do my hair in the summer.  It's just nice to switch things up from the basic pony tail every once in awhile.

Bun #1 : This one does require a sock bun.  All you have to do to make one is take a sock that is pretty close to your natural hair color (just in case it shows through) and cut the toe out.  Then roll the sock in on itself until you get a donut shape.  Use a bigger or flufflier sock for an even bigger bun.

Then just place the donut over your ponytail and wrap your hair on top of it on all sides to cover the sock donut.  Secure the ends with bobby pins by wrapping them around the bun.  If you take smaller sections, you can make the bun a little neater, but I just took three big sections and the bun is somewhat messy. 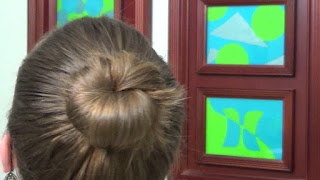 You can also use a sock bun to roll your hair in so you don't have any stray ends wrapping around and it looks much sleeker.

Bun #2 : This is the easiest of the three and it also looks more put together.  This bun also works even better when your hair is damp or even straight out of the shower, super wet.

Once your hair is up in a ponytail, divide the hair into two equal sections and starts twisting them around in one direction (I like to twist mine clockwise).  Once you get as far along as you can, twist the entire hair around the ponytail center in the same direction as before (clockwise in my case).  Twist it as tight as it will go and then secure the ends by wrapping a hair tie around the base of the ponytail. 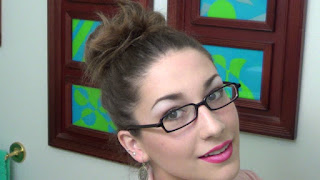 Bun #3 : This one is my current favorite, even though this works much better with longer hair than mine).  When tying the ponytail, don't pull the hair all the way through the last twist with the hair tie, leaving a loop of hair on top of the head with the ends loose.  Adjust the loop of hair so that it is big enough to stuff the loose ends into it.  This is when longer hair comes in handy, it makes a bigger loop to put the ends in.  Since my hair is a medium length, I tend to have loose ends poking out at the top.

After stuffing the hair into the loop as best you can, flatten out the bun so that it starts to make a rounded shape.  By pinning just the bottom half of the bun to the rest of the head, it will leave the top part of the bun loose to create a rounded shape.


So those are three really easy ways to get your hair up and out of the way for the hot summertime weather.  It's a little bit cuter than a basic ponytail, but will still take you less than 5 minutes in your morning routine.  I hope this was helpful!

Email ThisBlogThis!Share to TwitterShare to FacebookShare to Pinterest
Labels: hair