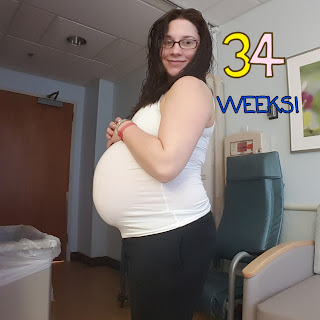 Ahh, it feels good to be in the 34th week! This was our goal week for keeping this baby boy in my belly! We're excited to meet you Calvin but just wait it out a little while longer! Man, 34 weeks just sounds so much safer than 32 and 33. I think as long as I can keep viewing each day as an accomplishment and each week as a milestone, we can get through this a little more easily.

In the Hospital:
I do feel like this whole experience is making me feel closer to Calvin. Hearing his heart on the monitor twice a day, everybody wondering about him, always checking up on him on the ultrasound, and simply just having more down time to experience his little movements and spend time with him have all helped me get way more connected to this little guy.

What the Doctor Says:
On Saturday the doctor came in to talk to us. After having made it one week since my water has been leaking, the risk of infection essentially plateaus. So, since I don't have an infection right now, and he says I'm in the 5% of those who make it to this point, risk of infection is pretty low from here on out. He anticipates me going into labor beforehand or being induced at 37 weeks.  He did say if we make it to 34 weeks, Calvin would probably spend about 2 weeks in the NICU. For a few days there, I had been having somewhat regular contractions, about 6 per hour when they monitor me twice daily. However, I have not been feeling them. He says that at this rate, it's possible I could already be 3-4 cm dilated once I start feeling contractions and real labor starts. If my body did go into labor at this point, he wouldn't try to stop the contractions. Because Calvin is big and my uterus is big, it's very possible Calvin might want to come early. So overall, it's still sounding all good right now and we are so glad.

Bump:
People keep telling me it looks somewhat deflated, but I don't think so. The bottom side is perhaps a little more squishy. Great. I'm totally gonna have a belly going on once Calvin pops out. Lol. Otherwise, I think it's just as big.

Maternity Clothes:
Wearing comfy stuff all the time these days is nice. Good thing I haven't bought any new maternity clothes recently, I wouldn't have been able to wear them much! I'm in yoga pants, pajama shorts and pants, tank tops, etc. all the time.

Emotions:
My doctor did come in to talk to me about increased risk of postpartum depression after something like this happens. Just being stuck in the hospital for so long isn't the best for your mental health, plus the fact that many women see themselves as inferior or somehow responsible for what's taking place doesn't help the situation. And I can understand that and I can totally see how those thoughts could creep in to your head. Thank God for the medical advances that we live with today. If I were in this situation one hundred years ago, who knows what would happen! Would Calvin even be able to survive if he came this early? Without medical intervention would we both get an infection? It's scary to think about and I realize, we don't live in that age.
I know that they say your emotions go crazy postpartum anyway and we've been pretty smooth sailing throughout this whole pregnancy so far, so honestly I feel like we're due for some crazy emotional times, perhaps it will come in that postpartum period. Lol.
So although he wants to see us make it to full term for Calvin's sake, the doctor realizes that my mental health is important too. So as long as I'm not going crazy in a couple weeks, all is well. Haha.
Another thing I worry about is future pregnancies. Our doctor said there would be a 1/4 risk of this same scenario playing out in a future pregnancy for us, which really worries me. My thought is, is it irresponsible for us to willingly bring another baby into the world knowing that there's a risk he could come too early and have complications. That really f's with my head. My husband Justin doesn't seem to think about it in the same way. He sees it as this 1/4 chance, we want four kids, so we're already going through this with Calvin and statistically shouldn't have to worry about it with the next babies. I've always wanted a lot of kids, but this just makes me question that. I guess it will all depend on just how much special care Calvin will need and how long he'll be in the hospital without us in the end.

Food:
Like I said last week, I feel like my appetite is more similar to my pre-pregnancy appetite than during pregnancy. I just don't feel the need to snack all the time or eat big meals. I thought perhaps it's just the yucky hospital food, but even when Justin brings me something else, I haven't been able to devour it like usual.

Energy:
Energy is good I guess. Life in the hospital is boring, but at least I don't just sleep all day to pass the time, that's a good sign.

Physical Symptoms:
My sisters have both mentioned that they think I'm less puffy than before, that my swelling and overall chubbiness has gone down. Although my rings still don't fit, my fingers are definitely slimmer, as well as my ankles and feet! Yay! I guess laying in bed all day really helps with the swelling lol.
Heartburn has been pretty intense this week. That's sucky, but if it means Calvin will have lots of hair when he's born, I can deal with it! I can't wait to see, I love babies with lots of hair.
My hips are feeling kind of achey again, after awhile of not feeling that way.
The doctor and nurses keep telling me I'm having pretty regular contractions, about six per hour, I'm not feeling them though. If I intentionally press on my belly, I can tell when I'm having one, but I don't feel them otherwise.

Movement:
Calvin is moving around just fine, which I'm so thankful for. I'm so glad that he has no idea what's up. Haha.
We did have an ultrasound Friday where he refused to move at all! We were with the ultrasound tech forever it felt like! She had me sitting up, laying on my side, jiggling my belly, and Calvin would not move! She was concerned about him, but literally just five minutes prior, he was behaving totally normally and moving around like usual. He was just being a stubborn little sleepy baby. Lol.
At the ultrasound he was doing a lot of what they call "practice breathing" and she said that was a really good sign, so that makes me happy.
In another ultrasound perhaps last week, we saw him lick his hand! I didn't see his tongue come out, but he definitely brushed his hand all up against his lips! Haha. That was pretty crazy. And then in another ultrasound, we saw him reaching for his foot with his hand. It's just so crazy all the stuff he's doing in there!

The Baby Shower:
They had it without me physically there, but you can check out the blog post here.

What I Miss:
Being at home, sleeping in my own bed with my kitties and Justin. People probably think I'm crazy, but I really do miss the cats. And I realize that (hopefully, God willing) when I return home I'll have Calvin with me, therefore, last thing I should be worried about is the cats, I'll have a newborn baby to worry about. But they were our first babies! Justin says my cat Nam follows him around the house when he's there. I don't want her to feel like I abandoned her and have replaced her with Calvin. And the idea of me not being with her for several weeks, then once I return I bring a tiny little human who she's probably not going to like at first, I think she's going to be mad at me. Lol.

Thanks so much for reading!
Love,
Alaina and Little Calvin
Posted by lainamarie91 at 5:58 PM