Sometimes I don't even feel like I'm pregnant. I forget about it. With Calvin, I thought about it every single moment of the day, it seemed. I don't know if it's because this is my second go-around, I'm too busy with my little toddler, the fact that I haven't told anyone outside my little family yet, or what, but in that regard, it seems so different than when I was pregnant with Calvin.

We announced to immediate family at exactly 5 weeks with Calvin, but we're hoping to make it until the first ultrasound this time around. Not necessarily for risk of miscarriage, but because when I was pregnant with Calvin I remember mentioning that I wished we'd kept it our own little secret longer. I go back and forth with this everyday though. One day I want to tell everyone, and the next I tell myself  I like being one of only three people who know. It's tough. And I'm so bad at keeping secrets.

And another thing that seems different is that the doctor doesn't even want to see me until it's first ultrasound time at 6-7 weeks. With Calvin, they immediately had me come in. Our first ultrasound is scheduled for August 17. It seems so far away now! It's still July! It's July 26, my mom's birthday, as I'm typing this segment. 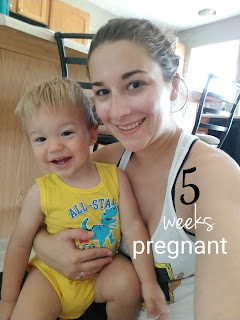 Bump:
Less bloating than the week before, it seems, so yay. :)


Physical Symptoms:
Fatigue finally started to set in. Hit hard at 4 weeks, 4 days.
Only a couple instances of light-headedness early in the week.
Got a zit in my mustache area.
I did get a yeast infection for like three days, they say they're more common in pregnancy, but I didn't have any with Cal.
Got a couple middle-of-the-road headaches. Stupid.
I had one little moment of very light pink spotting, but since I didn't have any cramping and it was only once, I decided not to worry much about it.
Nipple sensitivity is off and on. Started having some tingly sensations and aches in the boobs on the last day of this week.

Food:
I've been having a salad everyday for lunch at work. I get all paranoid and think my coworkers know I'm pregnant because I'm pretty sure I haven't had a salad every day since I was pregnant with Cal.
No aversions, no cravings yet.

Sleep & Dreams:
I had a scary dream, but can't remember it.
Definitely having more vivid dreams. I'll wake up and genuinely question whether I dreamt something or it was real.

Favorite Moments of the Week:
Over the weekend Calvin was playing with a little yellow ball that jingles with our cat Yuna. He was throwing it around the kitchen with her and laughing his butt off. He thought it was hilarious. I told Justin, if he's having this much fun playing by himself, just wait til he has a baby brother or sister to play with!

Random Thoughts:
I feel like I am more worried about miscarriage this time around. I really don't think I gave it much thought when I was pregnant with Calvin, but for some reason I'm more worried about it this time.
I kind of want to tell everyone (including social media) after the first ultrasound on August 17. By then the risk of miscarriage (according to http://spacefem.com/pregnant/mc.php?m=08&d=10&y=12) is down to 3%. Justin really wants us to wait to tell but I don't understand his reasoning behind it.