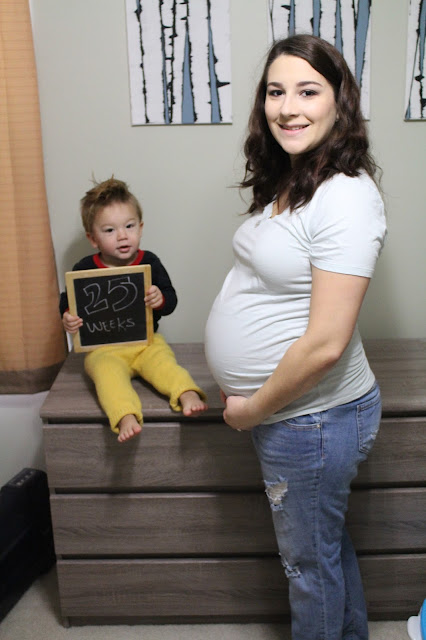 Bump:
Calvin distinguishes between me and brother in my belly. He will pat my belly and say "bubber" then pat my leg or my chest and say "mom." He even came over to give brother some chips. He placed them on my belly, waited a moment, then ate them himself lol.


Energy:
Took an extra walk this week, so I felt a little productive exercise-wise. Even when I wear my support belt, walks can really bother my hip and low back. I know that movement helps, but perhaps walks aren't the answer. Maybe some stretching and yoga are the better way to get my exercise in.

Physical Symptoms:
Zits everywhere. Dude wtf?! Looking back at my 26 weeks update with Calvin, I had some bad zit face going on then too, so I guess we've just reached that point in pregnancy. Haha.
Hip and back ache, blah blah blah.
Restless legs.

Food:
Baked cookies.
Baked some poppy seed bread at home. The recipe makes two loaves...
Mom baked a big cinnamon roll and brought it in to work.
Went out to dinner and the movies with Justin.
Just all over, too much unhealthy food and snacking this week!

Sleep & Dreams:
Acid Reflux kept me up in the night once this week.
Keep getting what feels like the start of a calf cramp but it never fully turns into a cramp, especially in the the night.

Favorite Moments of the Week:
Went on a date night with Justin to see the new Star Wars in theaters. We saw the last one when I was pregnant with Calvin. Sitting in the theater was legit super uncomfortable, and it's one of those cool theaters with the recliners. I could not get comfy, it sucked. But the movie was good lol.

I hope I'm not jinxing myself here, but I feel like I was way more emotional when I was pregnant with Calvin. Like little comments would set me off. But they don't seem to bother me much this time around.
Also this week it totally feels like pregnancy is too long! It feels like I've been pregnant forever and why isn't Eren here yet?! I don't remember it feeling this long with Calvin and I spent five weeks in the hospital waiting on him! I just can't wait to meet him and I want to see him sooo bad! :)

Love,
Alaina & Baby Brother Eren
Posted by lainamarie91 at 8:46 AM