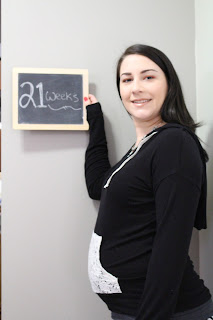 Bump:
Apparently I lean on my belly a lot. I lean on the counter at work, I lean on the sink when I wash my hands. So that's getting uncomfortable. I never really noticed I did that. Lol.

Maternity Clothes:
Might have to give up on the elastic Walmart pants I was so in love with in the beginning of this pregnancy. They were awesome at first when all of my regular pants started to get uncomfortable. But now they are stabbing me and cutting right into the area below the belly in a very uncomfortable way.
Some days I just hate pants altogether. And I hate that I can't just wear the same pants throughout this pregnancy! Haha. Well at least next time around I'll be set. And hopefully my sister can wear some of these clothes one day too so somebody can get more than a couple months of use out of them. I'm going to try and put up with these pants for a couple more months til we get to spring and hopefully I'll just do dresses for the majority of the time from there on out. Spending money on clothes isn't bad when the clothes are fun and different, but just buying different pairs of jeans is not so much fun. Especially when all this maternity stuff can cost so much.
I think this also could influence the pants situation: twice a day, I slather body butter everywhere from my thighs to my armpits and that stuff lasts forever on the skin, so it can make just the basic task of putting on skinny jeans a chore. Haha. Stupid pants.

Emotions:
Going good. I had one afternoon where everything was aggravating me, but I was able to control it and not freak out on someone else for no good reason. I have days like that in regular life too though, so not a big deal. But overall, I think I've been in a pretty good mood this week actually.
And one thing I think I've realized is that I laugh so much more now that I'm pregnant. Honestly. I laugh louder and harder at so much these days! I think that's a good thing. I think me and the pregnancy hormones get along pretty well in that department.

Food:
I've been eating yogurt like crazy lately. Yoplait Greek 100. Delicious. Most delicious stuff ever. I'm in love. I don't even remember what made me decide to pick those up but I'm addicted now, I never tried them before now. I want to try all the flavors. So far Black Cherry is amazing. Strawberry is pretty good too, with extra strawberry bits added in. Yum. I had a Whipped Chocolate Cherry one and that was so good. The whipped texture is just magnificent. Peach is alright, nothing crazy awesome. I wonder if they have a lemon-y one... I got Justin a Banana Strawberry one but he hasn't tried it yet. What I'm saying is, if you like yogurt and haven't tried these yet, you NEED to go find them! :) They are the best $1 snack you around I tell you!
Been trying to get more magnesium into the diet after my chiropractor suggested more calcium and magnesium. And these two seem to go hand in hand in the natural world too. Stuff with magnesium also tends to have calcium too. So, I've got a new salad recipe for the week to help increase these special little vitamins. All spinach salad with a handful of chopped broccoli, some cheddar cheese, one baby carrot chopped, a tablespoon of sunflower seeds, plus dressing (lately it's been zesty Italian). So I traded the bacon bits and croutons out. I usually add iceberg in with my spinach to give it something crisp, but I realize spinach is better than iceberg, so the broccoli is pretty good at replacing that crunchiness.

Sleep & Dreams:
Sleep is still kinda crappy. I always get a good amount of sleep, but I'm up many times throughout the night and just can't get comfortable sometimes.
Why have I been so bad at remembering my dreams lately? I know I've had weird ones, but I just suck at recalling them.

Energy:
I want to go to bed at like 7 pm and I never want to wake up until after a handful of alarms go off in the morning.

Exercise:
The weather has been decent for the majority of the week, so I took an hour long walk with Justin Saturday morning and half an hour Monday and Tuesday night. My shoulder is finally starting to feel better and I don't want to aggravate it again so I'm avoiding other workouts that involve too much movement of that area. I really liked the yoga ball workout I did last week but I'm afraid to hurt my shoulder when it's finally just starting to get better! Hopefully next week.

Physical Symptoms:
Light headed-ness again this week.
Restless Legs - I won't say I have Restless Leg Syndrome. My legs aren't tingly like I've read for the description of that, but I just want to move them a lot. I want to elevate them. I feel like skinny jeans are trying to suffocate my calves and ankles. I don't know how else to describe it but some days it drives me nuts! I just feel so uncomfortable. And it's not usually at night, but during the day at work. I work at a computer desk all day and I know that doesn't help things.
Headaches again this week.
Already getting some swelling in the ankles by day's end. Super.

Movement:
I can definitely feel him from the outside now! It's not super intense or anything, but you can tell there's movement in there. It also seems to be more intense when he kicks at my belly button versus down low. So feeling him was exciting to wake up to on the very first day of week 21. :) And at 20 weeks, 3 days Justin felt him for the first time! I think he was disappointed at how soft it was, not like a big ole kick or anything. Lol. But that was exciting! He finally got to feel him! I had him lay down and talk to him and he told him about the video game he's been playing lately (apparently he has to capture ten of each monster in order to get something else) and then just a minute after he was done telling him this story, he kicked a few times that I could feel and then there was one that Justin felt. :)

Oh, and another thing is at our doctor appointment last week, the ultrasound technician typed "ant pla" on the ultrasound picture. I am assuming that stands for anterior placenta, but I didn't ask about it. I thought that was weird because they say having an anterior placenta can sometimes make it harder to feel babies' movements early on. So, I could have been feeling Calvin even sooner! I already thought I started feeling him a little earlier than some other first timers. But anyway, with that being said, I have noticed that when I feel Calvin moving, it's strongest at my belly button. When he kicks down low, it's much softer feeling. So I thought that was interesting.

Favorite Moments of the Week:
Justin feeling Calvin move for the first time!

Baby Purchases:
We registered at Target this weekend for the baby shower. That was fun and overwhelming at the same time. Looking at all the different strollers and car seats and trying to decide which one was best was tough, so I did a little online research before adding those. It really helps things sink in though. The reality of having this precious little baby gets more and more intense with each passing week.

What I Miss:
Cookie dough! Oh man, cookie dough. While making cookies last week I just wanted sooo bad to lick the damn spatula! I could have cried over this. But I tell myself, I know the risk is small, but don't do it! How terrible would you feel if something bad did happen and your only excuse was, well I chose

Random Thoughts:
When I think about the fact that only 21 weeks ago, there was no Calvin and the fact that he grew out of two little cells into a little blob, into a little tadpole, and now he looks like a baby, it blows my mind. We all started that way! It's crazy to think about. It really does make me realize the true miracle that life is and it's absolutely awesome.

Thanks so much for reading!
Love,
Alaina and Little Calvin
Posted by lainamarie91 at 11:27 AM