Yay! It's the second trimester! Let all the joys of pregnancy begin! Haha. 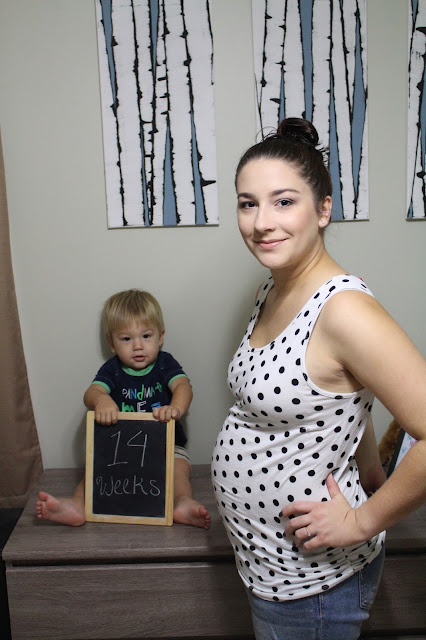 Bump:
Just waiting for this little bump to really pop! It happened at 15 weeks with Calvin.
I've started feeling what I first described with Calvin as a low, light rumbling this week. It feels like your tummy is rumbling but it's super low in your pelvis and it's very, very light. I remember it distinctly from Calvin because it was some of the earliest movements I felt with him. It's only a matter of time before I really start to feel this little guy!


Energy:
Still not feeling back to normal yet.
Finally got some fall-like weather so we were able to venture to the park this week and hang out outside a lot more.

Physical Symptoms:
I know I was a bitch in the beginning, but I'm pretty sure I've been behaving well lately. :)
Allergies or other nasal issues due to pregnancy? I remember having nasal issues with Calvin too in the beginning but it was also a similar time of year, so it's hard to exactly blame it on pregnancy.
Morning sickness, what are you doing? Got a couple days of it this week. Pretty intense actually.
Cramping this week. Kind of intense and with a backache and achey hips some days. Up until now it really hasn't been a big issue so far.
Round ligament pain seems to be happening a little more frequently. Maybe once every couple days.
Hairline zits seem to be increasing. Got a couple pimples on my face too. Super.

Food:
I wanted ramen noodles after dinner one night but didn't feel like making them so I got over it. Justin wouldn't make them for me either. :(
Also really really wanted pizza for dinner Friday night so we ordered that.

Sleep & Dreams:
I've been really awesome at actually remembering my dreams this week!
Had a dream an old childhood friend died and we had to attend her funeral.
Also had a dream about some other childhood friends and their house was falling apart and the son just kept walking around inside as this place was about to collapse.
Dreamt I was driving along the road like I was leaving Justin's parents' house when he still lived at home and it was all flooded and I ended up running off the road onto this embankment where I had to abandon my car and I was going to walk back to Justin's and I had to walk along this cliff which totally doesn't exist in real life.
Had another freaking dream about smoking. I was at a bar with an old friend and I was smoking and offered her a cigarette and she was like, only if it's nicotine-free and we laughed. Like we both knew I was pregnant and smoking... what the heck?

Favorite Moments of the Week:
Watching Calvin play with the laundry basket in the living room. He was having a really good time climbing in and out of it and picking it up and carrying it around and putting it on the coffee table and pushing it on the floor. Like why do we even have kids' toys when you get this big of a kick out of the laundry basket? Ha.
Going to the park and taking lots of pictures with Calvin. It finally felt like fall and it was a beautiful morning.

Anything I Miss:
Not feeling like a super hobo who can't stay up past 8:30.

Random Thoughts:
I feel like the working mom guilt is getting a little better this week. The blog post I wrote seemed to help me be able to sort through my thoughts and work up the courage to speak with my managers about going back down to four days per week. In a couple weeks we'll be able to have that schedule back. I really think that will help me gather my sanity again. Ever since I got pregnant, I've had some serious working mom guilt and sadness, like I want to call in sick all the time, and I've just been dreading going to work and leaving my baby boy, and just not wanting to be there. I hope the schedule change helps. It's been 5 months now of working 5 days per week and I know it's getting to me.

Name:
We have known baby's name for awhile now, but finally decided to post it to social media and let our close family know this week. His name will be Eren Michael. And actually, posting his name really makes me worry that he's not actually a boy and we're going to have to go back and make separate announcements once we get the ultrasound haha!