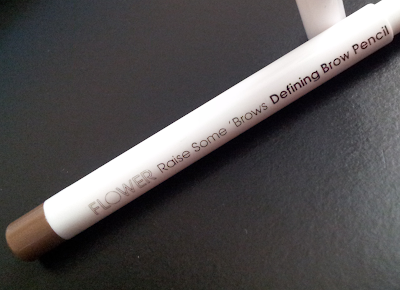 Since my Chella brow pencil is running out, I was on the hunt for an affordable eyebrow pencil.  I have loved so many of the things I've picked up from Flower, so I figured I would give them a go one more time.

I picked up both of these colors so I could figure out which one would work best for my hair color and figured I might as well show you guys what they looked like here in some swatches as well, in case you are a brunette looking for a decent and inexpensive eyebrow pencil.

I stuck with the light brown pencil because I felt like dark was too gray and ashy.  Plus light tended to show up darker actually, or at least more pigmented.  I felt like light was just a better match for my brows.

Overall, these pencils are nice because they twist up which is super convenient.  They actually also have a tiny sharpener in the bottom that I guess some people would like.  Personally, I don't see the point since it's retractable anyway and it isn't an actual blade, it's just plastic, so I could never really get it to work very well at sharpening. 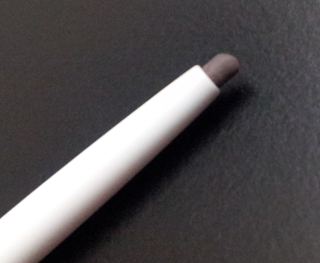 I'm not sure that I'm in love with the texture of these pencils.  They are some what creamy, which makes you wonder if they are going to last all day.  I don't have much of a problem with staying power, they do fade a little bit, but it doesn't really bother me too terribly much.  I find that the creaminess is almost wax-like, so it does a pretty decent job at holding down those crazy brow hairs.

This is the first drugstore eyebrow pencil without a crazy red undertone to it that I have found.  However, like I said, the dark brown one was too gray-like in my opinion.  So I guess that's what you get at the drugstore, too much red-tone, or not enough.  I enjoy this pencil, though it isn't super crazy awesome and I'm unsure if I will repurchase.  But I still can't see myself spending $20+ on an Anastasia pencil.  Yes, I understand that Anastasia is pretty awesome, but still I can't justify it.  This Flower Beauty one will just have to do for now.

Thanks for reading!
Love,
Alaina
Posted by lainamarie91 at 2:45 PM