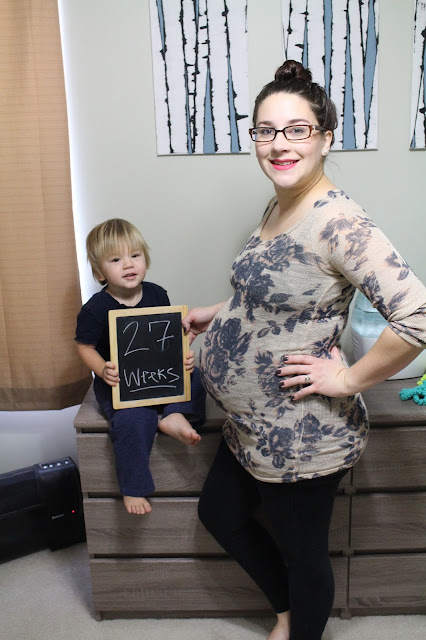 The last week of the second trimester, can you believe it?!

Bump:
It feels like Eren had a growth spurt recently. And looking at my weekly pics, I think the bump is definitely looking bigger these last couple weeks. Once again, I've said it a million times, but holy crap, how big will this bump be by the time Eren arrives?!
Also, I've been able to feel Eren's little body parts protruding out. He'll just stick them out and sit there for a few seconds. It's cool to be able to feel that little bump for awhile. :)

Energy:
It feels like I'm back in the first trimester again lately. I want to nap every day.

Physical Symptoms:
My back and hip have been hurting less. I don't know what I've done differently though...
Have been feeling more contractions lately. Mostly they just feel like Braxton Hicks tightening of the belly, but maybe 2 or 3 times they've had a bit more intensity. I started drinking a ton more water and that seems to help overall, but I'm still going to bring them up at my doctor appointment next week.

Food:
Trying to make up for Christmas, but I still probably snacked more than I should have.

Sleep & Dreams:
Stupid restless nights. I just can't get comfortable. And when I can, I then simply can't shut my brain off and just sleep, or I get acid reflux, or I need to pee. Blah.


Favorite Moments of the Week:
Calvin and I were sitting on the couch watching TV one morning and he just started running his fingers through my hair saying "brush."
I've gotten to spend much of the week with Calvin since it's the awkward week between Christmas and New Year, work was super dead. I'm so grateful for that time with my love. It was awesome to be able to hang out with him so much. He's been so good about nap time, he falls asleep really quickly and I really took those moments to just watch him sleep for a minute or take his picture. He's so grown up, guys! I can't believe it some days. Those are the moments when I have to really step back and say he's not a baby anymore.

In my mind I can't see myself going past 40 weeks because Eren's been measuring about a week ahead this whole time, plus Calvin was a big boy and he came at 37 weeks (8 lbs 6 oz). I just assume they'll induce me before Eren is a 10 pound baby, but I guess we will have to see haha. And if he is a 10 pound baby, we're pretty much guaranteed he'll fit in one size diapers at birth so that whole newborn stash thing was pointless... haha

Love,
Alaina & Baby Brother Eren
Posted by lainamarie91 at 8:50 AM