30 weeks. Holy crap. I literally, absolutely, seriously cannot believe we're already here! And I remember how fast the first 10 weeks flew by, I can't even imagine how fast these last couple months will be! 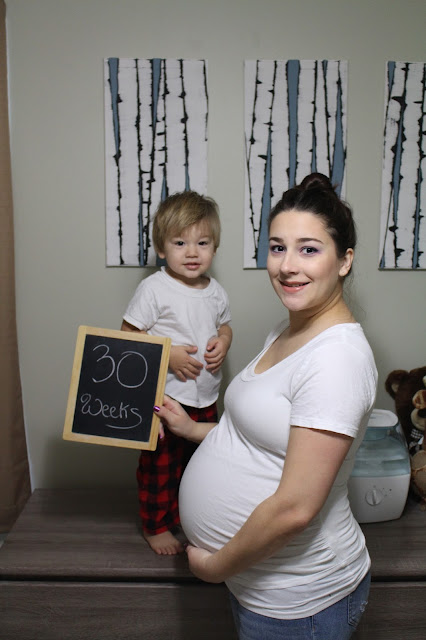 I feel like Eren has had another growth spurt. I feel like my whole belly just weighs a ton. If I lay on my back while lounging, watching TV or whatever, I just feel like my belly is too heavy, it's uncomfortable to lay like that for more than a few minutes. The weight of my belly rested again my back and spine is not comfy at all anymore. I don't remember ever having this feeling when I was pregnant with Calvin though.
I feel like Eren is sleeping and waking in longer stretches. I feel like he has more periods of stillness than before. And when he's awake, holy crap he's having a party in my belly. I don't feel like his movements have slowed like it's getting tight in there just yet though.
Been noticing Braxton Hicks even when I'm just sitting down.


Energy:
I want to nap pretty much every day, but have yet to do it. I'm okay to stay awake in the evenings, it's just that middle of the day desire to pass out that's taking over these days.

I got to meet with my regular doctor this week, but next week I get to see Eren on ultrasound at MFM and see if my fluid levels are okay! I am excited to see the results of this three week diet limiting carbs.

Physical Symptoms:
Even though I've been keeping up on my yoga ball hip opening exercises, my hip has been bugging me a little bit this week. It's not nearly as bad as it was back in December before I started using the yoga ball, but it's just not as perfect as it has been lately.
I'm also feeling like it's hard to catch my breath at times. Almost like it's hard to get a nice deep breath.
Also definitely feeling like I got punched in the pubic bone, it feels very sore and almost strained. I definitely don't remember that being this early with Calvin.
Been having some very slight light headedness in the last few days of this week. Just a random wave of it here and there.

Food:
Tomorrow I get to find out if my three week diet helped my amniotic fluid levels. I'm super excited to see the results, but I am preparing myself as well for no real change. The way I see it, even if it didn't help my fluid levels, I know for a fact it's helped in the intense weight gain department, and I'm pretty sure in turn, that has helped the water weight/swelling issue too. If I look at pictures of myself at this point with Calvin, my face was so darn chubby, I almost hate to see pictures of myself at that time. I know I gained a lot of weight with Calvin (over 50 pounds). My feet would be so swollen every night, my calves were so huge it was uncomfortable for me to kneel on them. I don't have these issues this time around. Perhaps that was all going to happen anyway, no matter my diet, but I like to think that at least I tried and at least things look better than they did last time around. I'll know I tried my best to prevent the complications that happened last time with Calvin, even though the doctors all say it was a fluke thing and I had no control over it. Sometimes you just can't help but think, what if I did this differently?
It's kind of how I am viewing my hopeful VBAC attempt this time around. Perhaps I just can't give birth to these big babies naturally. Perhaps that's just not how my body is made. However, if I don't at least give it a try, then I'll definitely never know. That's why I'm prepared for another c-section, even though I know it will suck physically and psychologically, at least I'll know I gave it a go.

Favorite Moments of the Week:
We went to my dad's property to help him lay some pipes. Calvin loves it over there. He could wander around for hours on end and never get crabby or bored, even though it was quite chilly. He loves the tractors. He played in the dirt. He's such a boy haha. I wonder if Eren will enjoy getting dirty too. Part of me can't help but imagine him as just another Calvin, sometimes it's hard to remember he's his own little individual.

Random Thoughts:
I remember when I was pregnant with Calvin, Justin talked a lot about his high school days or the early parts of our relationship, just reminiscing on the old days when he was young and had no responsibilities, etc. I worried about him then, that he was regretting having a kid and being a grown up. We were only married and moved out of our parents homes for a few months when we got pregnant. I'm glad he isn't like this now. This time around, he always talks about seeing Calvin and Eren growing up and playing and us just being a big family together. I'm glad he seems to be more excited for the future instead of dwelling on the past.

Love,
Alaina & Baby Brother Eren
Posted by lainamarie91 at 8:19 AM