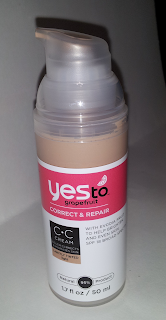 I bought this on impulse, I hadn't heard anything about this product, but had been wanting to try a new item from the Grapefruit line anyway, so I said "hey, why not".

It has a dewy finish but looks nice when set with Neutrogena Shine Control Powder for a matte finish, which is what I tend to like lately.  I like that it looks matte with this powder on top, but it still feels wet underneath and feels heavy on my skin, so I can definitely tell it's there, which I don't like, especially with my oily skin, it just adds to the uncomfortable feeling of stuff being all over my face.

It feels alright underneath foundation, but still has a bit of heaviness.  This will probably be nicer in the wintertime instead of the summer heat and humidity.

This product actually really minimizes the look of pores which is awesome because I've never encountered a product that actually does that (even ones that claim to do it).  It works great as a primer for that reason.

It's not really meant to be a foundation sort of coverage, I know that, but I think this is a really cool product.  It reduces redness immediately and just evens out my skintone really well. I don't have super problem skin, but there is some minor redness and discoloration I wish wasn't there, so this product is very handy for me.

This stuff smells awesome, you can definitely smell grapefruit and other citrusy scents (but it does include fragrance as an ingredient, so it's not all naturally coming from just the fruits in there).  It's very liquidy, making it very surprising that it actually covers/cancels out redness because it's such a thin consistency.  It's pretty cool how it cancels out the redness and reduces pore size, and I'm impressed with that; however, not so impressed with the price at $15.99.

So if the heaviness doesn't bother you, this is a pretty awesome product because I can actually see improvements to my complexion as soon as I apply it.  However, I haven't been able to see any long term results just yet.

PROS
cancels out redness
immediately reduces the look of pores