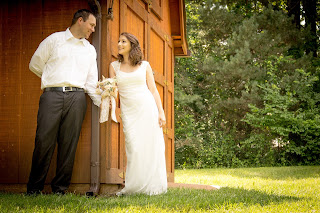 I have some exciting news! I wish I could bring you all on this journey with me, but I also want to keep it to myself too. You'll see this all in due time! This is the first real decision my husband Justin and I are able to make all on our own without the input of anyone else, without having to care or worry about what our friends or family have to say about it (of course we hope they are as excited as we are). No matter what, this is our decision and I think that might be one of the most exciting things about it. We have decided after 6+ years together, almost 3 months of which in marriage, that we want to start trying for a baby!

Now I know that trying could take months and months and so I think that's partially why I don't want to broadcast this all over the internet until things have started to come together. As I'm writing this, we have only just decided over the weekend that this is what we want to do. I have had babies on the brain for awhile now, probably about a month or so. It's strange because we had always previously discussed waiting several years after marriage, yet I couldn't seem to get it off my mind!

And so I got off birth control at the beginning of August, initially to see how it effected my headaches. I get migraine headaches a lot and the past few months they have just been terrible. I am convinced they are at least partially hormone related, based on how my close female family members have explained their own headaches in relation to their changes in hormones over the years. As I read more into the effects of the birth control pill, I am so glad that I got off it as soon as I did. A few weeks ago we decided we would start trying in the spring or summer of 2016, giving my body plenty of time to get back to normal from the pill. Just this week though, we said what the heck, let's just go for it. I know it could be several months before my body even gets back into the swing of things. I know this could be a very long journey, but I just want to document it all both for myself and for any ladies out there who are curious. Even though I'm not even pregnant yet, I am interested in finding more bloggers out there telling their pregnancy stories. I already ordered some books too. I never seem to make the time for reading these days, so I figured this would be a good time to start again. I got What to Expect When You're Expecting, What to Expect Before You're Expecting, What to Expect: Eating Well When You're Expecting, and even one for Justin, What to Expect When Your Wife is Expanding. They were all only $35 on Amazon, so I said "eh, why not?"

So let's just start with some rambling... and I hope this is somewhat entertaining, comforting, or exciting for you to read! Hopefully there will be plenty more posts along the way and definitely some fun videos on my vlog channel LainasLife.

I have been taking regular women's multi-vitamins since the beginning of the new year, but after doing some reading, I decided to pick up some Prenatal specific vitamins. That seems to make it feel very real to me. I took my first prenatal vitamins last night and told Justin "now it's official."

We want to have four kids. I know for some, four sounds like a lot, but others it might not sound like that many. For me, I think it's a nice little even number right between too few or too many. :) I am one of three sisters. Justin is an only child of his mother's but there are five of them from his dad. He's the youngest, and the only one left without kids. (Justin is 27 and I am 24 just fyi) I know his mother really wants grandbabies sooner rather than later. His dad wants him to have a boy to continue on the family name. I don't really know my parents' thoughts, honestly. When we told them we wanted to wait five years or so after marriage, they felt that was too long. But only being married like three months, I feel like they might say that's too early. I hate thinking about what they think though. I don't want to feel guilty. I don't want to feel like I don't want to tell them when we get pregnant because I'm afraid of their own personal thoughts on the matter. I have two nieces who are seven and four, I can only imagine that my mother is thinking it's time for a new grandbaby (and hopefully that is the case).

I feel like we have been raised to think that it's so easy to get pregnant when we're younger: by our sex ed teachers, our parents, friends. They used these scare tactics to make us think that every time you had sex, you would get pregnant. Get on the pill and use condoms too, the pull out method doesn't work, and all kinds of things that taught us that sex was bad and pregnancy was the end of the world. But when I read into more stories about those who are actually trying to conceive for months and years on end, it seems like it's a much more difficult task than I thought. For this reason, Justin and I have decided to start trying earlier than we thought we would need to. I was afraid it could take us 6-12 months. But Justin and I had to make the decision on our own. We had to decide that even if it happens this month, we would be happy, but also prepare for the idea that it might not happen for quite awhile too. And I don't think we're going to take the extreme approach to this. We're kind of in a "if it happens, it happens" kind of mentality. I won't be tracking my cycle per say (I have the Period Diary app so I know when my period is supposed to come, when I could be ovulating (not based on temp or anything), etc.), or using ovulation tests or anything like that (at least to begin with), but I just like the idea of not having to worry about birth control methods or being afraid of pregnancy. So, on that note, I don't know if some would even call it "trying," but for us, we have always been avoiding it, so "trying" is just the opposite of not trying and there is no middle ground, I think. That's my explanation of it anyway. :)

I want to talk to my older sister about her pregnancies and how long it took her to conceive. I want to talk to my mom. I want to tell my little sister and just explain to her how excited I am to even start trying! But I will hold it all in and see how these next few months go. I just feel like this is such a big decision, even if it takes months. Like I said before, it's just the fact that we are no longer trying to avoid it that makes it exciting. It's something neither of us have ever done before! Yet, we're doing it together. It's just exciting!

So I think we're taught these days not to let anybody other than those super close family members know until the 1st trimester is up and the risk of miscarriage decreases significantly. But I'm not sure how I feel about that. If you're trying for your first baby and you lose it, I would want to be able to tell people and feel comforted by them, not just sad on the inside and unable to express it to anyone but my husband. However, even though I don't have anything close to a "large following" on Youtube or any other social media for that matter, I understand perhaps not telling the internet community until that first trimester is up. But I must admit that I'm a terrible liar and I cannot keep a secret for the life of me! I guess that's why I've decided to try this secret diary thing. I can let out all my thoughts and feelings.